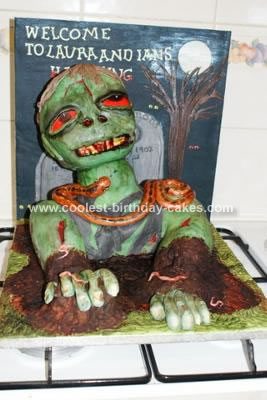 For friends who have unusual taste I created Martin the Zombie complete with a background of gravestones with their family names on it! It was completely edible apart from one internal support. All paint effects are done with edible paste colours.

To create this I first tacked two cake boards together so that Martin would have a back drop. I first of all completed the background detail making a tree from rolled out icing and also completed the headstones. As it was for a party I put “welcome to Laura and Ians haunting” on it in yellow wording and painted the lower half with a little red to make it more sinister.

I painted eyes on the background to suggest more creatures out there in the night and completed the scene with a pale round moon from rolled out fondant icing.

I allowed this to dry for a couple of days and then covered and painted the base, once this was dry I cut the cakes to make a torso and arms pushing brown fondant around the green covered flesh of the Zombie to make it look as if it was rising from the grave.

Martin’s head was a cake made in a pudding basin and I used two plastic dowels to secure the head to the torso. He started off with green flesh and yellow eyes but looked too much like an Alien so I changed the eyes to blood red.

I covered the head twice with green fondant and peeled back sections which i then painted red for wounds and rottenness! To make teeth just cut squarish yellow pieces and once in place over-wash with yellow brown and red in varying degrees.

Part of his head I removed and put in a section of gray brains for gruesomeness but obviously this could be toned down for someone more sensitive. The brain was just fondant rolled into a long sausage shape and bent into a ‘brain’ shape (just Google ‘brain’ and look under images – it’s not too hard to make especially in a small section!

I completed Martin’s fingers by adding sliced almonds for nails which are suitably yellow and rotten and flaking looking (if anyone has a nut allergy you can paint thin pieces of fondant instead).

Tatty strips of clothes and patches of brown food colouring completed the look. For finishing touches I made a fondant snake but he would be equally happy amongst inedible props of plastic spiders rats and the like.

This homemade zombie cake was fun to make and the possibilities are endless, if you are not confident to make facial features why not cover the torso in grubby bandages – a perfect mummy cake! (But perhaps not for Mothers day!)