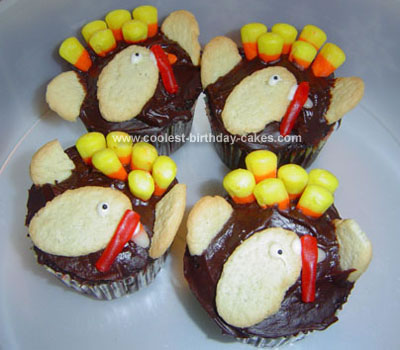 I have made these Turkey cupcakes several different years, and taken them to playgroups and parties and sent them to my husband’s office Thanksgiving party. The idea is from a parenting magazine, and as soon as I saw it I knew I had to try them. They are fairly time consuming, but it is only once a year and they are so cute.

I just baked cupcakes using a box mix in Thanksgiving themed cupcake liners. After cooling, I frosted with chocolate frosting (I think it was just a canned version).

The head and wings are Keebler Sandies mini cookies (sold only in 100 calorie pack bags with 6 bags to a box). The head is a single cookie lying down, and the wings are a cookie broken in half and stuck cut side down into the frosting.

The beak is the pointy end of a piece of candy corn, and the tail feathers are candy corn pieces pushed pointy side into the frosting.

The “wattle” is a little piece of fruit leather cut and rolled up. I actually used fruit by the foot since I couldn’t get regular fruit rollups in plain red. The fruit by the foot box had several flavors, but I just used the red ones and that provided enough for the wattles. They are attached with a little dab of white frosting.

The eyes are just a little dab of white frosting with a small black sprinkle (non-pareil circular kind) pushed into it. These were from a Halloween sprinkle mix that had black and orange since I didn’t see any plain black in this style (and I had some of the Halloween kind left!).

They do take a while to put together, but they are very cute and everyone is so impressed!