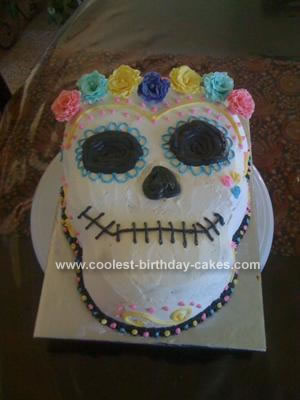 For this super cool Dia De Los Muertos Birthday Cake I used the Wilton smiling skull pan. I baked 2 cakes in order to be able to stack it to make a 2 layer cake. I used chocolate cake with a chocolate ganache filling. I used a box of cake mix for each layer. I made chocolate ganache from scratch and also made the buttercream. I used a gumpaste/fondant mixture to make the roses. I made the roses days in advance to make sure they would be dry when I had to put them on the cake.

I struggled to make the black icing color!! I started with a chocolate icing base and then kept adding black until I thought it was dark enough. Used some sugar skull pictures as inspiration for my skull. I knew I wanted to incorporate the flower headband since the beginning. For the bottom border I used a star tip and then dotted each star with a different color.

This is my second year making a Dia de los Muertos skull cake for my BFF’s birthday.