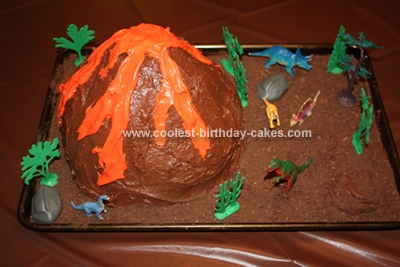 This homemade Dinosaur Land Volcano cake was pretty easy to make and my son loved it! I started out by baking 2 boxes of cake mix, one in an angel food cake pan and the other in a regular round cake pan.

After letting them cool I placed the round cake on a baking sheet and then flipped the other on top of that for some height. Using a knife I just cut pieces off the top to make it look the way I wanted and stuffed some of the extra pieces I had cut into the hole at the top so that it was not so large. I also used some extra pieces as boulders to put around the volcano.

I used store bought chocolate frosting to cover the cake and the baking sheet it was resting on. I used store bought vanilla frosting and added red food coloring to make the lava the color I wanted. I placed that into a Ziploc bag and cut a tip at the bottom to squeeze it out. I didn’t like how round it made the lava look so I spread it a bit with a knife.

Then I took a box of chocolate graham crackers, crumbled them inside a Ziploc bag and spread them around on the baking sheet to make it look more like dirt around the volcano. I let my boys place their dinosaurs, trees and rocks where they wanted to. 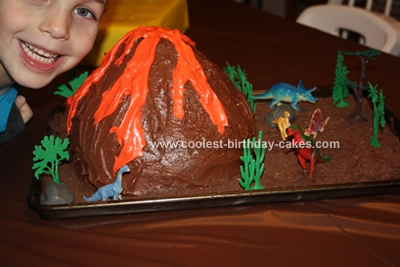 An Easy To Do Volcano Cake