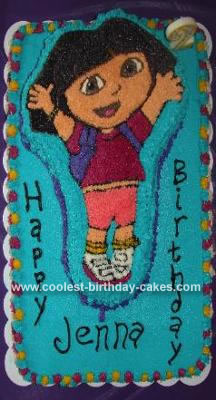 My daughter is a huge Dora the Explorer fan. For her 2nd birthday I knew we would have a Dora theme and a Dora Cake. I went to several grocery stores to see about getting a Dora cake. I didn’t like any of the ones I had found so I decided to turn to the internet for ideas.

I found this site and saw several really great Dora cakes and thought maybe I’d try my hand at it. I bought the Dora shaped cake pan at a local craft store and the other necessary tools.

I used 1 white cake mix for the Dora shaped cake and 3 chocolate cake mixes for the sheet cake. After I let the cakes cool I made a very large batch of buttercream icing which consisted of butter, powdered sugar, vanilla and milk.

I mixed the colors according to the Dora cake directions. I first outlined Dora with black and brown and filled in with the colors specified. It reminded me of a color by numbers book.

When I finished Dora I then iced the sheet cake with a color I had chosen and added the colors I had left to make it pop. I then placed the Dora shaped cake on the sheet cake and used black icing to write Happy Birthday and my daughter’s name. I finished it off with a #2 candle.

This was my first attempt and it was so much fun. It was also easier than I had originally thought. I will definately be making cakes for all the birthdays to come. It is cheaper, tastes better and it’s fun!