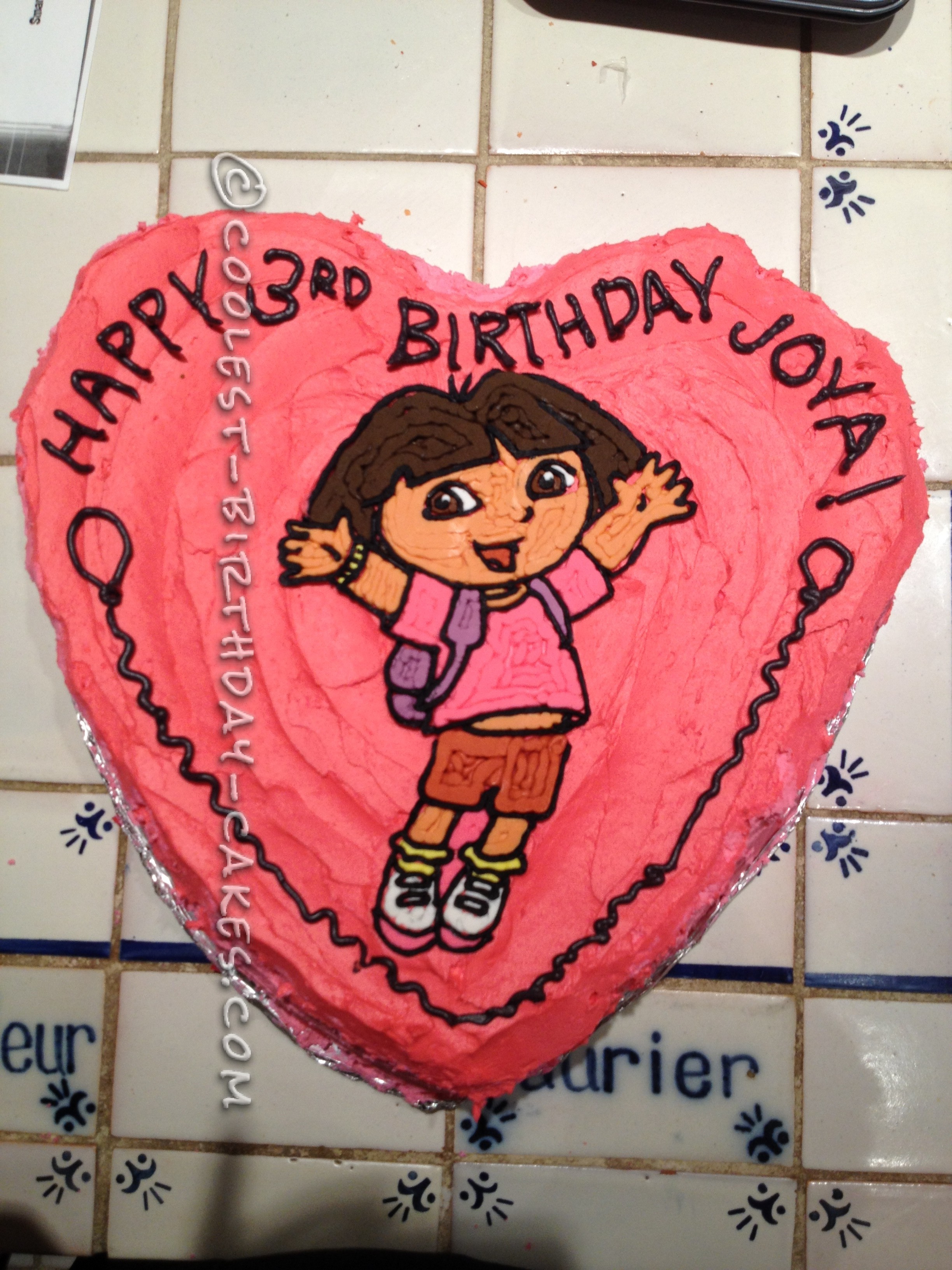 When we asked my two-year old daughter what she wanted for her third birthday, she replied, “A pink cake.”  Pause.  “With Dora on it.”  A couple of days later:  “A pink cake with Dora on it and a heart around her.”  Pause.  “With chocolate inside.”   When I asked whether it could be a square cake with a heart drawn on it and Dora inside that, and I drew a schematic for her, she burst into tears.  Definitely not a square on the outside.  Had to be a heart.  And she added that it had to be a big heart.

My husband wrote it off that this wasn’t happening.  But, I couldn’t let my daughter’s extremely specific one request for her birthday go unanswered.  So bought myself the biggest heart pan that my oven and refrigerator could handle (about 15″ x 16″), and justified the expense with thinking I’ll have a lot of Valentine’s Day cakes to bake in the next couple of years.

Leaving nothing to chance, I bought five boxes of back up Duncan Hines Devil’s Food cake mixes.  But I opted to make the Baking Illustrated Devil’s Food Cake.  Not sure of the volume I needed for the heart shaped pan, I used one recipe portion for an 8″ triple layered cake to one heart pan and made the recipe twice for two layers.

For frosting, I used the Wilton frosting recipe of 4 cups confectioner’s sugar to 1/2 cup butter to 1/2 cup shortening plus a couple tablespoons milk. After reading reviews online, I invested in a 3 lb. tub of Hi-Ratio shortening. I thought I’d be using a cup or maybe two and have a ton left over. Turns out I have less than half of it left.

But I repaired it with frosting.  In total, I used four full batches of frosting plus an extra one made for the Dora image. I used a coloring book picture which I reversed in my computer and printed out, then taped to a cutting board and taped wax paper on top, and then iced the outline of Dora, and then the colors, freezing in between. I froze the image for about 7 hours before flipping it onto the top of the cake, which got a final frosting layer and refrigeration for about 2 hours before receiving the image.

The cake and decorations met with my daughter’s approval and illicited delight. I served a party of 25 by cutting an inner heart around Dora and serving the outside of the cake, and now we still have the Dora cake image left over for my daughter’s actual birthday which is on a weeknight.  It was well worth all of the trials and tribulations, although now I have set a high bar for myself going forward! 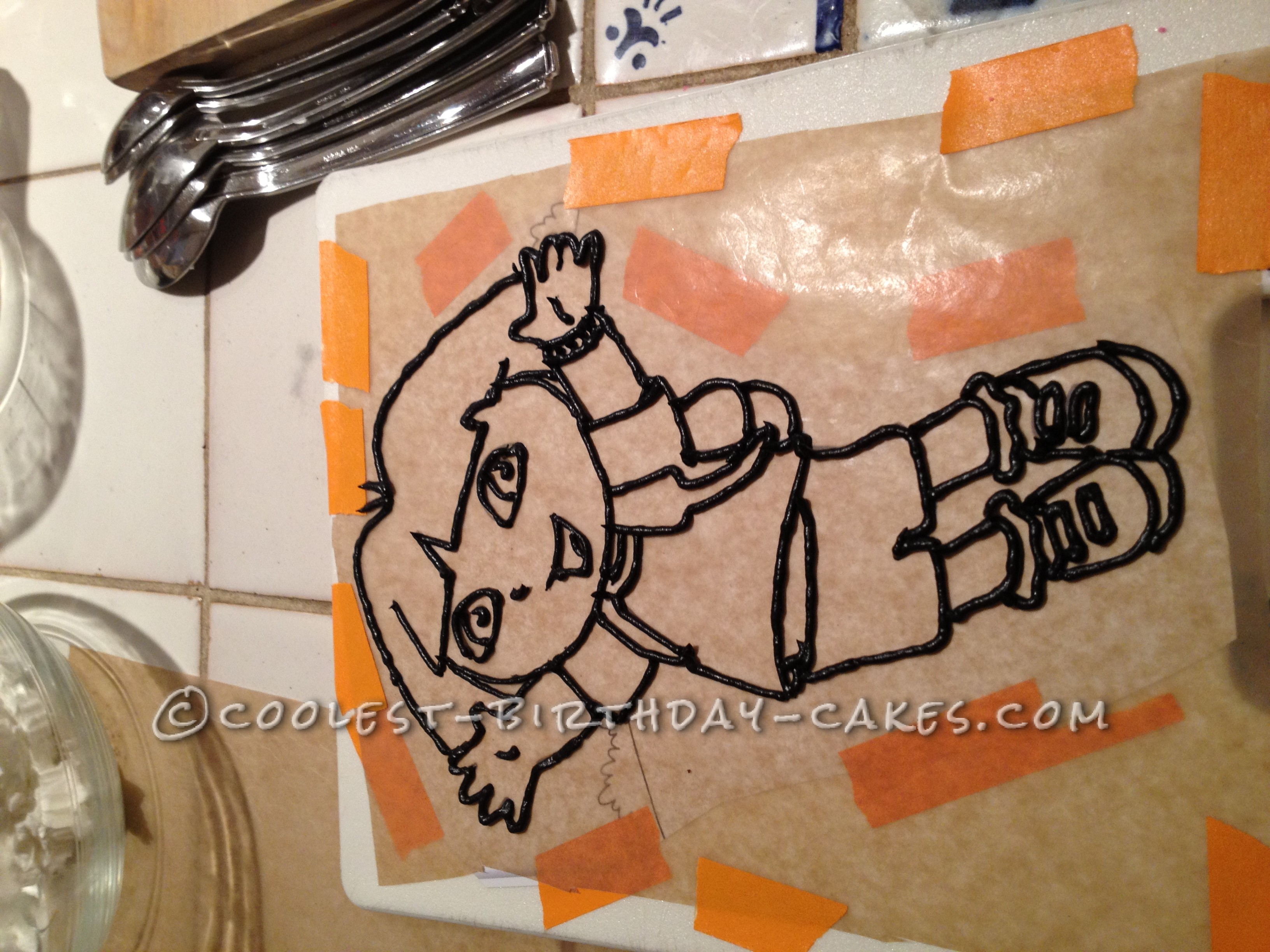 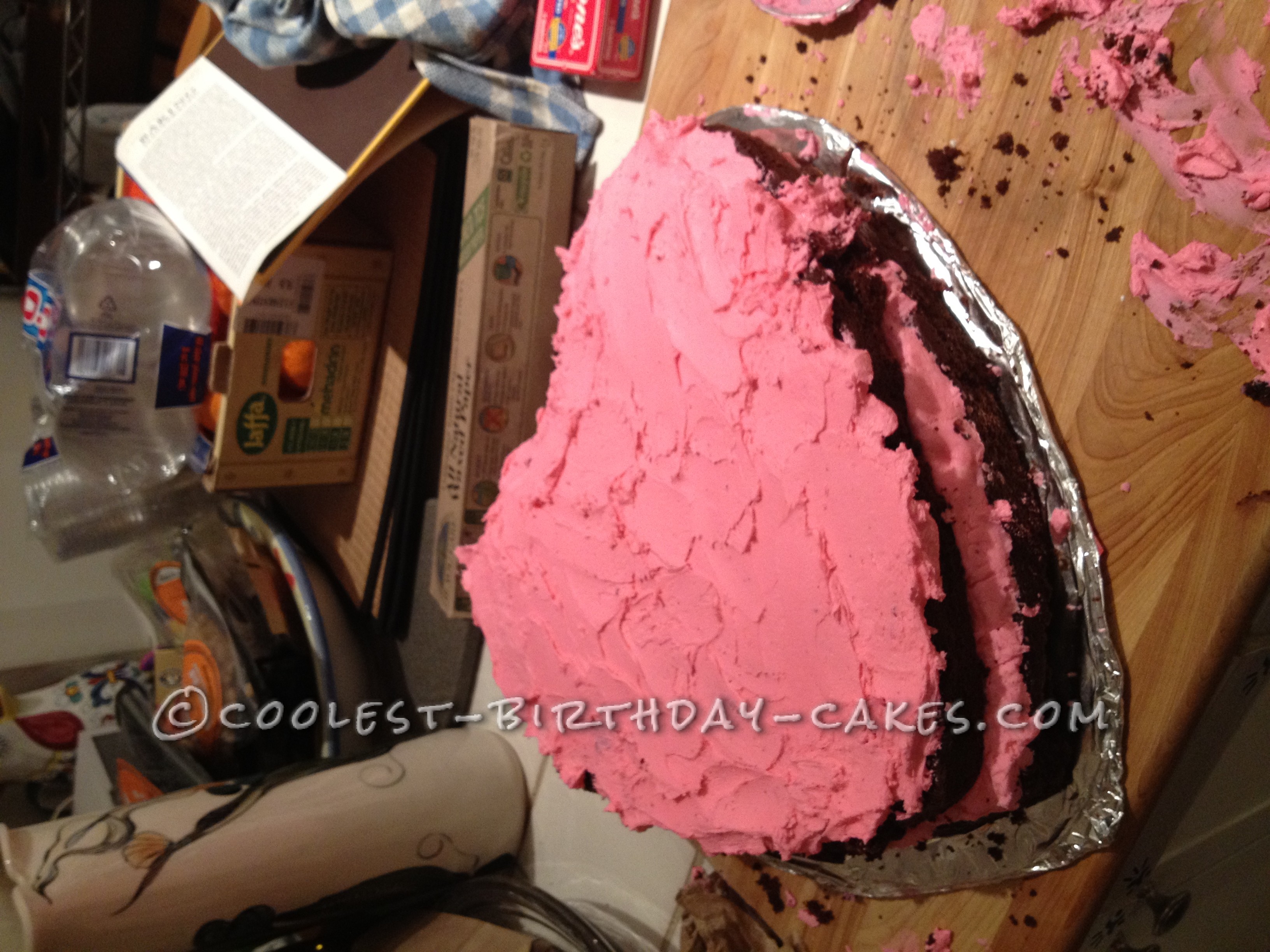 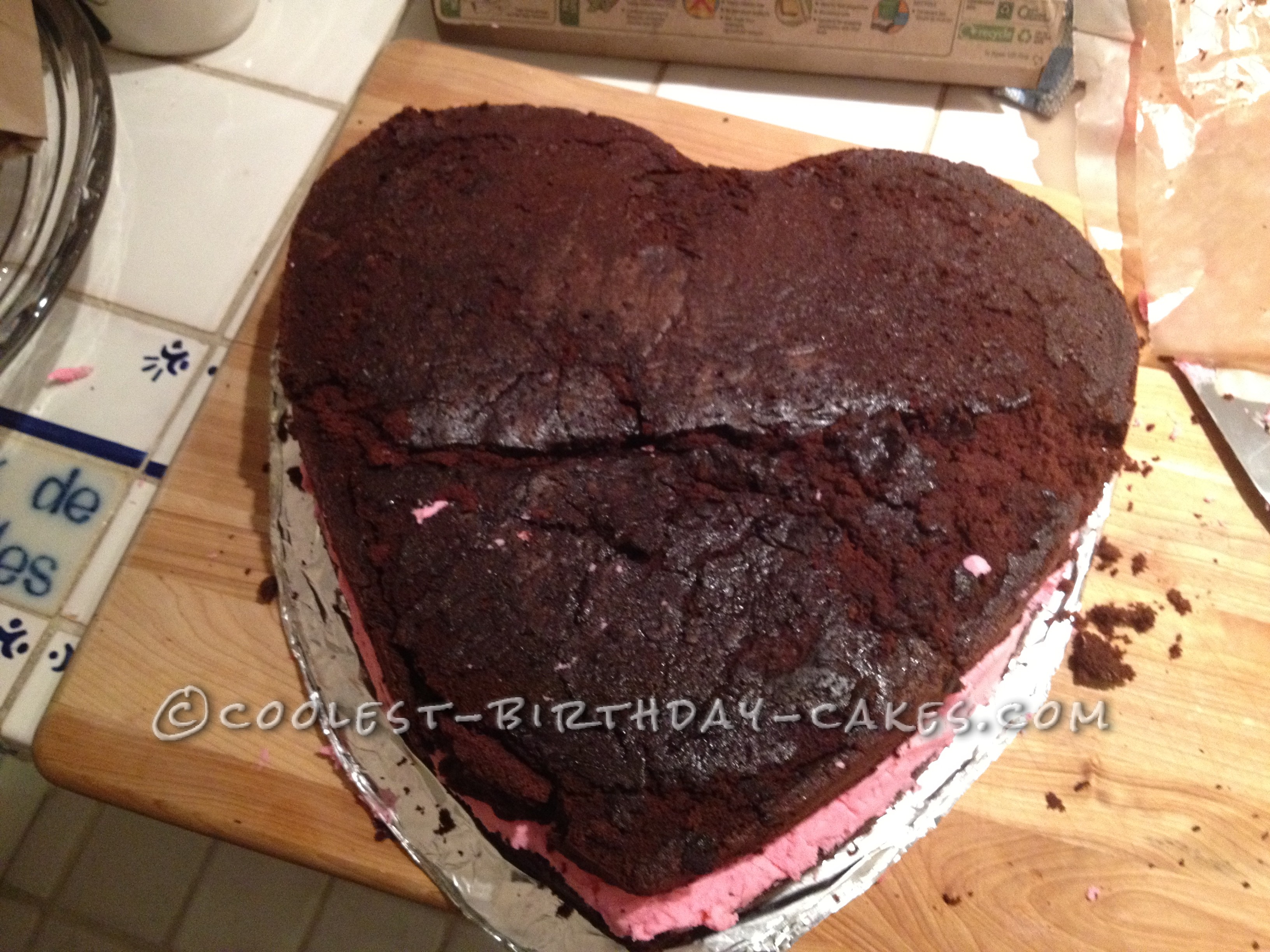 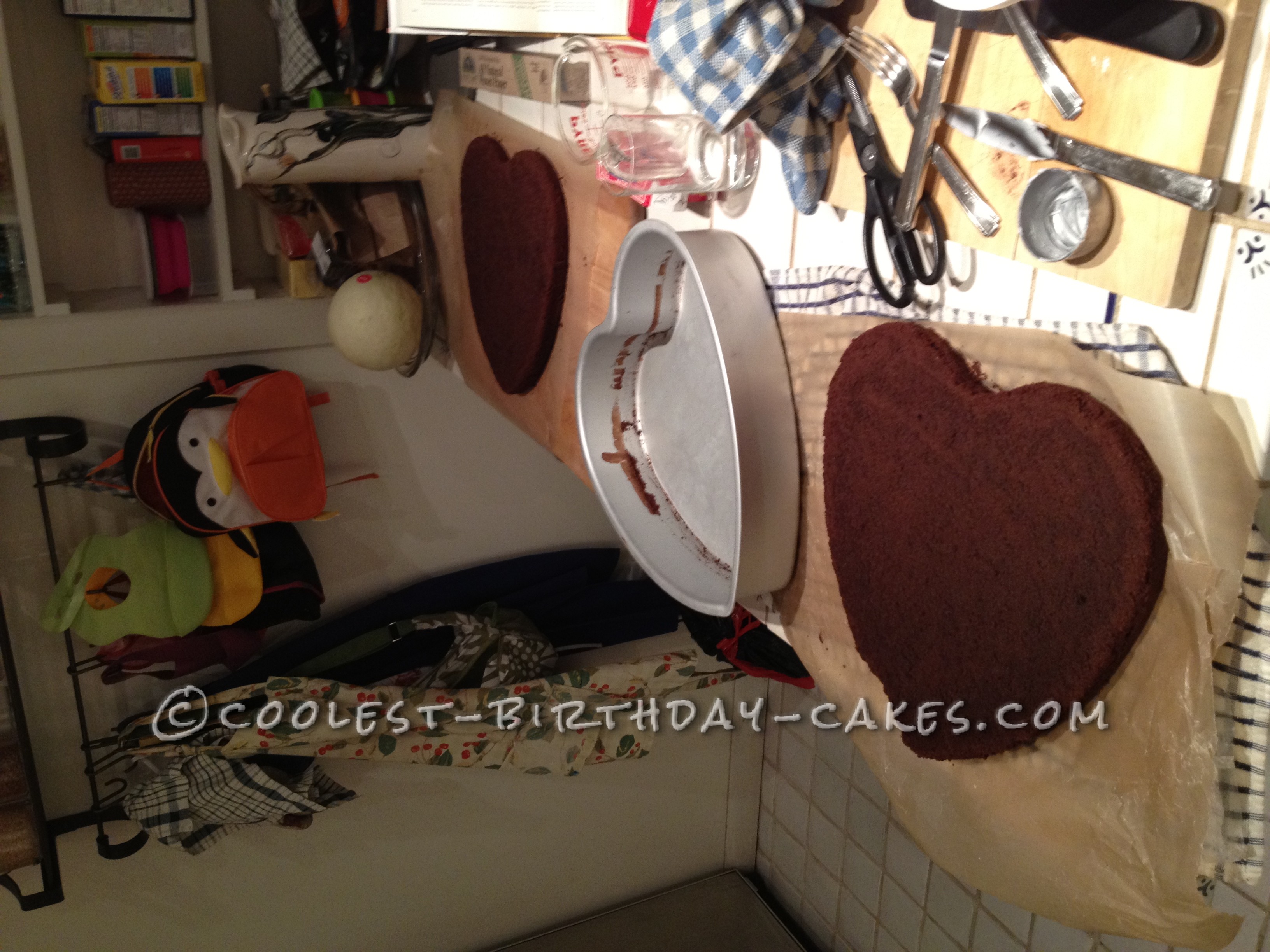