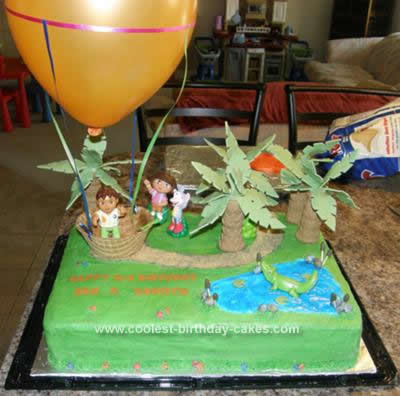 This Dora & Diego 3rd Birthday Cake Idea is the cake I made for my twins’ birthday. Their party was Dora & Diego themed and so the cake was made to match the party.

The finished size of the cake is 13×18. I made 2 chocolate cakes and set them side by side for the bottom layer and another 2 french vanilla cake for the top layer. The layers are separated by a layer of buttercream.

The main icing is a green buttercream.

The pond was created using blue buttercream and covering it with blue tinted piping gel. The rocks and lily pads are made from a 50/50 blend of gum paste and fondant and the reeds are made using tooth picks and the gum paste/fondant.

There are 5 palm trees. They have 7 or 8 palm fronds each. The leaves and outside trunk are made from gum paste/fondant and the inside of the trunk is rice krispie treats. I used sucker sticks in the center of each to give them some stability inside and to also allow them to stick into the cake.

The basket of the balloon is a waffle cone bowl that I purchased.

The pathway is made from brown coloured buttercream underneath and is sprinkled with graham cracker crumbs. This was the first time doing this and I think the next time I would find a way to cover the rest of the fondant before applying the crumbs. I found they scattered into the other areas and I ended up doing another layer of buttercream to cover them. Another idea would be to possibly do the pathway first and then finish the rest of the cake so the stray crumbs aren’t seen.

The letters and flowers are made from candy melts. I used the same font as I used for the invitations, resized it and printed a mirror image of it. Putting wax paper over top of the image and using a #1 and #2 tip, I traced the letters in chocolate onto the wax paper. Once set, I was able to gently press them into the crust of the buttercream.

Lastly, the grass was created using a #234 tip.