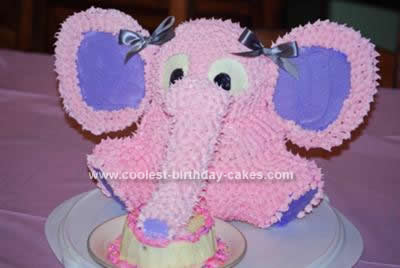 This Elephant Birthday Cake was made for my daughter’s first birthday party. I took the idea from this website, and put it together with some cake decorating suggestions found on other sites.

The cake started with the Wilton stand-up cuddly bear. Wilton directions said to use a pound cake mix and layer cake mix combined together or cake mix with pudding in the box, but my first attempt using those directions fell apart. The second time I made my own pound cake (tripled the recipe), greased the daylights out of the pan, floured the pan, and prayed. It came out great!

After it cooled I cut the ears off and smoothed the bear nose a bit with my first “crumb” layer of icing. Then I used a knife to spread light violet icing for the eyes and foot pads. I followed up with a number 18 tip and pale pink icing to make the stars.

To create the ears I cut cardboard to the right shape and used toothpicks to stick it together. Lesson learned here—smaller ears would have been better. The weight of the icing kept pulling the ears out by the time we were ready for the party!

The trunk was a piece of wire and some marshmallows. Stale marshmallows worked better because they had more stability. I coated them with a “crumb” coating before adding smooth icing at the tip of the trunk and covering the rest with stars. The trunk needed support, so I used the 1st birthday smash cake to prop it up. (This was the cake we gave to my daughter to stick her hands in.) The smash cake was made with a 4 inch cake pan; a cupcake would have been great too.

To finish I made bows out of a simple ribbon and stuck a candle in the smash cake. We decorated with a pink table setting and peanuts!