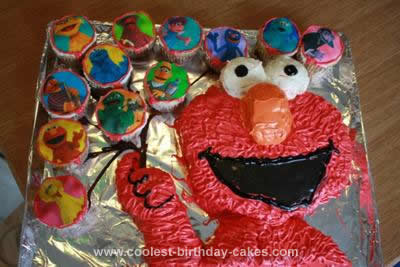 I made this Homemade Elmo Cake using a 10″ round pan and cupcakes. I cut the outer ring of the cake off and saved the pieces to form the Elmo head, then using the pieces I formed his shoulders and arm. A cupcake for his hand and a little nub for a thumb.

For the face I diagonally sliced two cupcakes to form the eyes and for the nose I used a half cupcake with a little shaved off each side to make it more oval. I used store bought vanilla frosting and tinted it red and orange, and chocolate frosting with blue dye for the mouth. I also bought black for the outline and the eyes.

The cupcakes were printed decals but any design would do I already had these so wanted to use them. I used chocolate frosting in a tube to make the strings.

I think if I made it again I’d use two 8″ so I didn’t have to cut so much off the face, it was hard to frost the sides after being cut, but I decided to make the body of Elmo after already making the cakes :) I used a frosting bag with attachment to make the fur effect after first frosting the whole thing with a flat base layer. It was super good and all the kiddo’s liked it. 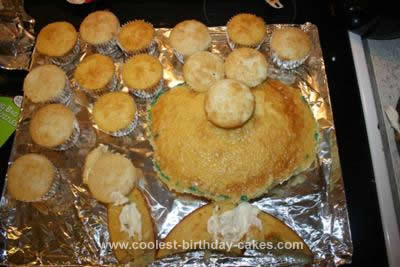