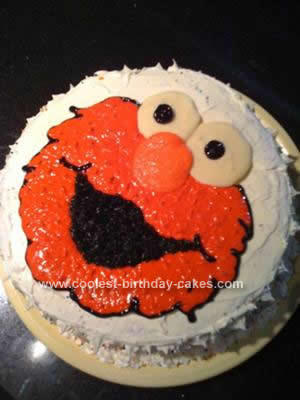 I made a 3 layer cake and covered it in cream cheese frosting. For the Elmo head I traced the Elmo face on the frosting with a bamboo stick (anything sharp will do). I used his Elmo lunch bag for a blueprint. I then outlined the entire thing in black using one of those handy gel tubes you can buy at the grocery store.

I then made some homemade royal icing and added red food coloring to it and piped it inside the lines, one dot at a time. I screwed in a cake decorating tip onto the back gel tube and filled in the mouth.

For the eyes and the nose I used white chocolate. I melted a few cubes of cubes of white baking chocolate over a bath of boiling water and poured 2 spoonfuls onto wax paper, making sure the shape is round. I then refrigerated the paper with the 2 round shapes until the chocolate was hard. Using the same gel tube I made the 2 back dots.

I had to improvise for the nose, so I mixed some red food coloring into the melted white chocolate and and yellow decorating crystals, made a round shape with that mixture on wax paper and refrigerated it. For those better prepared, orange food color would do.

When the chocolate hardened I applied the eyes and nose to the face securing them with a little royal frosting.

THE MAGIC: the cake would not have turned out as well if I didn’t have the great idea of re-applying the back gel one last time, after everything was in, thus being able to add a few design details that I couldn’t have otherwise. It really made all the difference in the world