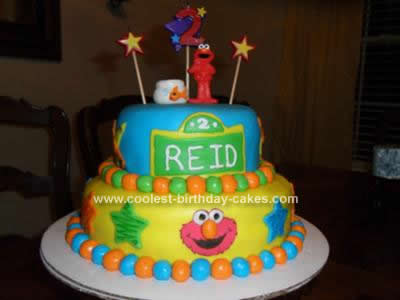 I made this Homemade Elmo’s World Birthday Cake for my son’s 2nd Birthday. This is my first fondant cake ever, but I’m SO happy with how it turned out. My inspiration for the cake came from Elmo’s World, the show on Sesame Street and the colors from the plates I got for the party. I wanted it to be bright and colorful.

I started by making marshmallow fondant days before the party from scratch using the recipe by Peggy Weaver. The stuff stores forever, so I decided to make two batches, just in case I needed more. Although I found that the recipe covered MUCH more than my little cake! I head nearly half of my batch left when I was finished! And that’s with a lot of “taste testing.” This stuff tastes FANTASTIC!

I baked two 6 inch rounds to make the top tier and two 9 inch rounds for the bottom tier. I used a torte leveler to make each layer nice and flat before stacking each individual tier. The cake itself is Yellow and Fudge Swirl with chocolate iced filling and I crumb coated it with some store bought Cream Cheese Icing (not the whipped kind – it is too soft!). To cover the cakes with fondant I followed Peggy’s instructions. I stacked the cakes directly on top of each other once covering them in the fondant. I didn’t use any supports in the cake and it was just fine. The fondant is awfully heavy though and if I were to do a bigger cake I’d definitely use the support!

Once I started working with the fondant I was PLEASANTLY surprised with how easy it was to use. I would compare it to play-dough! Everything on the cake is edible except for the candles (obviously) and the Elmo on the top which is actually my son’s fork top. I just stuck it right in! All the decorations were made from the fondant except for the piped writing on the Sesame Street Sign and the Elmo on the very front. It was made out of a red sugar sheet. I used edible markers to draw Elmo on the sheet, cut him out with scissors and put the fondant eyes and nose on him before putting him on the cake. I also used the same marker to give his eyes irises and put lines on the crayons to make them actually look like crayons. I used a craft paint brush to put water on each decoration to adhere it to the sides of the cake and it worked fine.

I am very pleased with how this turned out and I can’t wait to make another fondant cake! 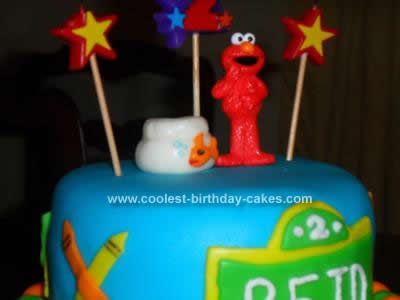 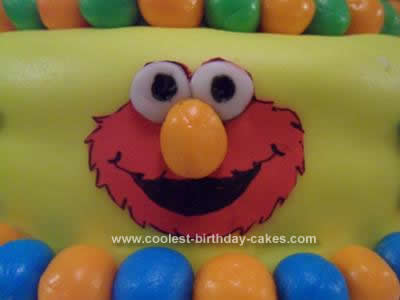 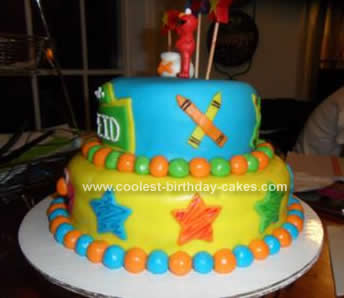