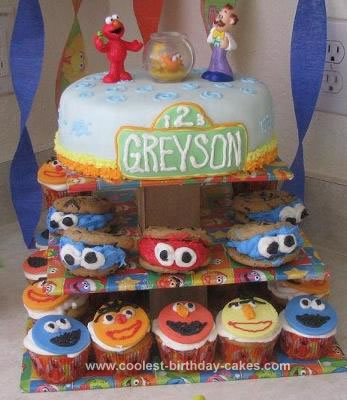 This Elmo themed cake was made for my son’s 2nd birthday. The top is a double layer cake, with butter cream and marshmallow fondant. We used the Sesame Street cut-out on the site as a stencil for the “Greyson” Sesame Street sign. We emphasized the “2” for his birthday. The sides of the cake have “abc” and “123” piped, the top has swirls. We cheated a bit and bought the toys for the top!

The middle layer had chocolate chip cookies with tinted butter cream smashed in between. With googley eyes piped of course!

The bottom layer had cupcakes topped with butter cream. My husband then cut out circles from fondant and used butter cream to make them look as much like the characters as possible. Job well done hubby! He also constructed the last minute stand and covered in Sesame Street paper for his little guy!

We were impressed with the marshmallow fondant, it was much better than the store bought we tried before. My son loved his cake, but the toys on top couldn’t be beat.

What I’m really proud of is getting this cake finished. Since my son’s birthday is the day after Christmas (not to mention the newborn too!).

I started with nothing but a pack of toys and determination but ended up with a amazing cake!