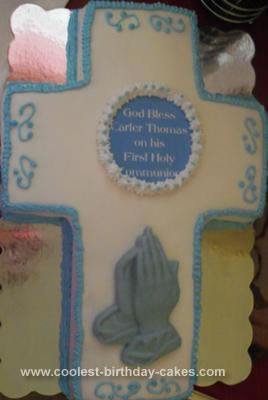 I used an 11×15 pan and cut the shape out by cutting it in half lengthwise and then the other half was cut into 2/3 and 1/3 pieces. The longest ½ was used for the cross piece and the two smaller section were placed above and below it to make the shape. I found the template on another website. I was able to not waste any cake by cutting it this way.

Originally this cake started out to be all butter cream with butter cream decorations but I had a really hard time with the icing. I could not seem to keep the crumbs from the cake out of the icing so I decided to cover it in white fondant instead. The decorations are however, in whipped icing (which I will not use again as it became very runny the warmer it got and became very hard to work with). I will definitely stick with butter cream or decorator’s icing from now on. These are both much more user friendly.

I used blue bead that are edible around the edge of the icing on the nameplate, and on the scroll work. I used tweezers to place each bead to make sure they were put in the places that I wanted. The nameplate is the only thing on this cake that is not edible. Because the icing was difficult to work with I couldn’t get the lettering just right so I used a card program to print out the nameplate.

The praying hands are made out of candy melts that were tinted blue and put into a mold. Although, this cake did not turn out exactly the way I pictured it, my friend was still very happy with the end product. Every cake is a learning experience for sure.