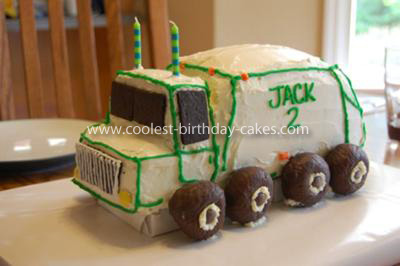 My son LOVES garbage trucks, so I naturally decided to make a Homemade Garbage Truck Birthday Cake for his 2nd birthday. I really wanted a 3-dimensional cake and was surprised that I could not find specific instructions for one online. I drew much of my inspiration for this cake from other cakes on this site and also relied heavily on actual photographs I took of the garbage truck that hauls our trash. Both were equally helpful as I frequently switched back and forth between images to figure out how to put it together.

Although I do not have specific instructions, I will provide several tips… I baked 3 pound cakes (though, I ultimately only used about 2 .5 of them) and froze them (wrapped in plastic wrap and foil) after they were cooled. This made cutting and shaping the cake a breeze with few crumbs. I was very disappointed by the flavor of box-mix decorative cupcakes that I made for my son’s 1st birthday, so I took it to the other extreme and followed Cooks Illustrated recipes for pound cake and vanilla butter cream frosting. Both recipes were rather involved and time consuming- but delicious and well worth it. I will say that tripling the pound cake recipe was pushing the capacity of my stand mixer and I was elbow-deep in batter by the end, but it did fit. I used Krispy Kreme chocolate mini donuts for the wheels (I liked how substantial they appeared to be in other cakes on this site)—the Krispy Kreme seemed better than other brands as they had a rounder shape. I used orange Tic Tacs for the lights (perfect from a design standpoint, but not really enjoyable to eat with the cake). I used chocolate wafer cookies (usually available near ice cream toppings in my store) for the windows… heat in the microwave for 15-20 sec. to soften, then cut shape immediately so it won’t crack or crumble.

The “garbage” in the back of the truck is rough-cut Nestle Crunch bars. My son loved the cake, but was disappointed that he could not open the door to put a garbage man inside! That’s a 2-year-old for you! 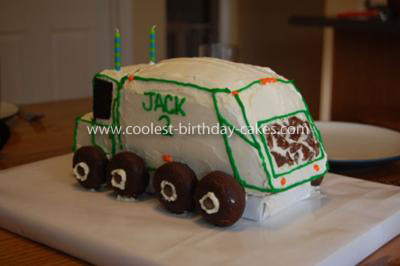