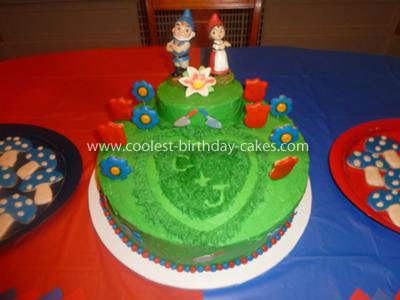 I made a two layer 14 inch cake for the base using strawberry boxed cake mixes. I added a one layer 6 inch cake on top for the characters to stand on. I used homemade butter cream frosting for the entire cake (except the fondant Cupid’s Arrow Orchid and the little gardening tool accents, which were also fondant). I wasn’t able to find any Gnomeo and Juliet toys (checked online and at the Disney store, apparently they didn’t make them). I lucked upon some Gnomeo and Juliet plant stakes at a local hobby/craft store and planned the cake around them. In the movie the two characters mow a heart with their initials in some tall grass, so that was the inspiration for the grassy area. I used the same butter cream and a grass tip in the shaped of a heart leaving open the area that would have been mowed down – G + J for Gnomeo and Juliet. In the movie the characters meet while both were trying to get a Cupids Arrow Orchid for their garden, hence the fondant flower with the arrow drawn on it. I also found some small cookie cutters shaped like a spade, watering can and hedge clippers. I cut them from red and blue fondant (like the rival Gnome groups). I added silver fondant dusting powder for the metal parts. I mixed it with clear vanilla and painted it on (I had a few spots that I then touched up with the dry powder). I placed them around the large cake. I added two opposite facing spades to the top cake and placed the plant stakes on top. The red and blue flowers are sugar cookies. I cut small flower shaped cookies and inserted tooth pics prior to baking them. I decorated them with red and blue butter cream (thinner for cookies). My daughter loved it and I got lots of compliments for originality.

I have to give my daughter the credit though, the theme was all her idea. 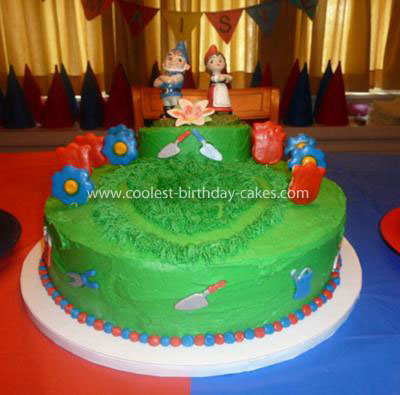