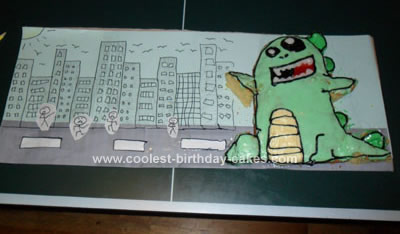 I have been known to make unusual cakes so when my friend approached me asking if I could make him a Godzilla Birthday Cake for his birthday, I was more than happy to take up the challenge. I began my looking up pictures of cartoon dinosaurs on the internet to give me inspiration. When I had my design and knew exactly what to do I began.

First off, I made 2 cakes. 1 12x8inch rectangular cake and 1 10inch round cake. As the cakes were of different sizes I used different quantities.

For the round cake I used 6 ounces and 3 eggs. As the cakes cooled down I set about making the background. I cut out a large strip of card and stuck several pieces of blue paper onto it as the ‘sky’. Then printed out 2 pages of paper with grey squares and stuck it onto the bottom for the road. I stuck on some white paper for the lines on the road. Then I simply drew on the buildings, sun and birds. I wanted to make it clear that it was Godzilla so I cut out some people running away. I put clingfilm over the area where the cake would be and then went to shape the cake.

With the rectangular cake not much needed to be done, I went round with a sharp knife and made the top round for the head and then curved it outwards at the bottom for the start of the tail. With the round cake I cut out the 2 arms in the required shape, tail, foot and the scales. I then made up some glace’ icing and coloured it green. I placed the parts in the right place on the clingfilm and stuck it together with this. I also covered the cake in the green glace’ icing.

For the scales I made the green slightly darker to give the cake more character. Then made up butter cream for the stomach. The eyes and mouth was done with store brought writing icing. To give the cake the true cartoon effect, I went round the edges in black writing icing and made it more detailed and defined. Once this was done it was ready to eat and proved popular with everyone.