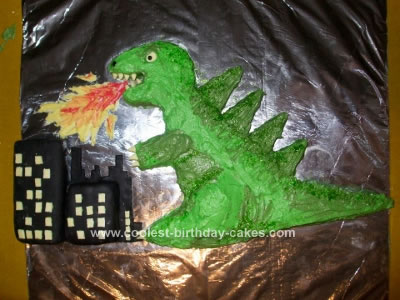 This Godzilla cake was made for my friend Thom’s 22nd birthday and went down a treat! He is a massive Godzilla fan and was happy that I had put so much effort into making it look so authentic. I had a helping hand from my boyfriend Andrew to create the composition and it only took me about 4 hours to ice!

I will definitely be making a version for my nephew’s birthday when he’s old enough to enjoy it. This could easily translate into any dinosaur cake, as long as you’ve got a picture to hand and enough cake to cut into shape.

My Godzilla cake started life as a standard coffee and walnut sponge recipe, made into two square cakes. To make Godzilla’s basic shape I cut the cakes into several portions – one for the main body, one for the head, one for the tail, one for each spike, etc, like a jigsaw.

The pieces were then glued together and covered using a basic butter cream icing colored green. Shading was created by darkening some of the butter cream with a little instant coffee diluted with warm water (not much as it makes the icing too runny). The rough surface texture was created by putting the icing on roughly with a fork.

For an extra level of detail I sprinkled on some green glitter flakes to look like Godzilla’s scales. The eyes, teeth and claws were created using pale yellow ready to roll icing molded into shape and pressed into the butter cream.

I had some spare cake left over so I decided to create a sense of scale by depicting Godzilla next to some tiny buildings. The pieces of cake were covered in some remaining butter cream to create purchase for the roll out icing. For this, I used black roll out icing (or you could dye it yourself using food coloring). I rolled it out using plenty of icing sugar to stop it sticking and carefully rolling it round the rolling pin, laid it out on top of the cake.

The edges were smoothed down and as it was only small, I actually managed to pick the cake up and fold the edges of the roll out icing underneath to create a very smooth surface. To make the windows I rolled out more of the pale yellow icing and cut it into tiny rectangles. These were then stuck onto the buildings with a little of the butter cream at intervals.

Before the buildings were placed onto the scene, I made a skyline for the background using more black roll out icing.

Finally, the flames coming out of Godzilla’s mouth towards the tiny buildings were made out of a small amount of butter cream icing, tinted yellow for the bottom layer, with a little red food coloring added at a time to make the orange shades. With a fork I added a little of each color on top at a time. 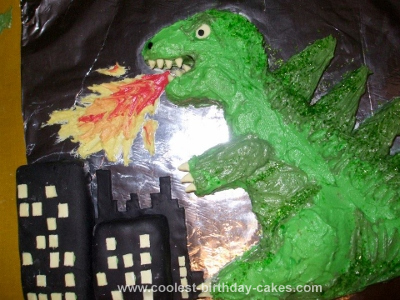