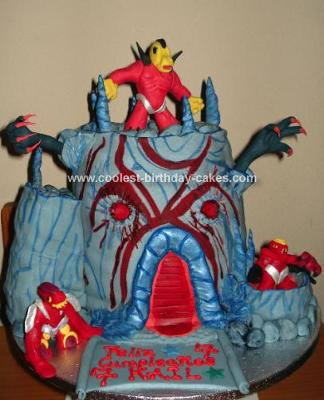 A friend’s son is into Gormitis so I looked them up on the internet and decided to do Fire Mountain, the Lords of Lava’s fortress.

I made 4x20cm chocolate sponges and 2x15cm ones. I also made 6 large chocolate muffins. I sandwiched the sponges with real chocolate gnashe and layered them all together into a column. I then covered the whole cake in chocolate buttercream and then set it in the fridge to set.

I made 3 kilos of MMF which I coloured grey. In between times I made 3 figures out of MMF with gum tragacanth added, for strength. I used raw spaghetti where I had to give extra support to the figures and to the lava formations on top of the volcano.

I made the towers and lookout out of the muffins, layered up and then covered in icing. I made rocks out of the MMF too. The whole cake was covered in MMF coloured grey. I added the details and eyes and mouth with red MMF fondant. I made a scroll out of left-over MMF fondant and wrote the birthday message on that.

The Gormiti Fire Mountain cake was received with rapture and I received a thank you email with a picture of the birthday boy with his remaining cake, and there was not a lot left!