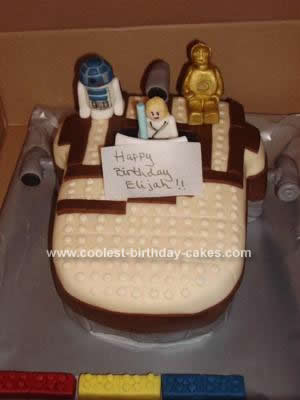 The whole process took 3 evenings plus another 15 minutes or so on the day itself to make the Lego block candle holders and assembling the toppers on the cake.

1. On the first day, I baked the cake, coloured the icing that I was going to use and made the models as follows:

I used a 6 egg Madeira cake recipe; 12 oz of self raising flour, butter, sugar; 6 oz of plain flour and some vanilla essence. I divided the mixture into two 8 inch square tins and baked this at gas mark 3 for 45 minutes. While the cake was cooking, I coloured the sugar paste that I would use for covering the cake the following day. I coloured about 600g of Regalice in sugarflair colours to obtain a beige colour and coloured about 200g of it grey.

Once baked and cooled, I wrapped the cakes in cling film and allowed the cake texture to settle overnight.

I made R2D2 and C3PO using modelling paste. I dried them on some sponge so that it would set for painting and decorating.

2. On the second evening, I carved and covered the cake as follows. I also painted C3PO. I stacked the cakes on top of each other and carved it around the template as mentioned earlier.

I filled and covered the cake in butter icing made out of 125g of butter, 300g of icing sugar and some milk. I then used the beige coloured sugarpaste to cover the entire cake. To make the Lego tiles, I used some ready made chocolate roll out icing cut into strips to wrap around the perimeter of the cake to hide any untidy edges from the beige icing at the bottom and embossed some joins using a butter knife. I did the same with the grey paste for the next layer. I cut some more strips of chocolate icing to make the tiles on top of the landspeeder.

To make the Lego blobs, I used a straw within a straw as a plunger cutter on the remaining beige sugarpaste and stuck them using some water mixed with sugarpaste at 1cm intervals. To make the seat, I cut a black rectangle and stuck this in position. C3PO was painted using “Antique gold” edible lustre mixed with a little vanilla essence and left to dry on sponge overnight.

3. On the night before birthday boy’s party, I added the engines (I think that’s what they are), made Luke Skywalker, the windscreen, the lightsabre and finished R2D2 as follows.

To make Luke, use some white modelling paste for the main body and the arms, use flesh coloured modelling paste for the head and neck and join using sugar glue (or paste mixed with water as before). Thread a piece of spaghetti for the head and the body for extra stability. Make the hands by partially wrapping a straw using small pieces of paste until firm enough to hold without deforming but not completely dry. The hair was made using strands of yellow paste stuck together in position.

The engines were made using the grey sugarpaste and rolled into shape using a cake smoother. I attached candy sticks to the sides to insert them into the cake for extra strength.

I finished R2’s detail off using bits of blue, red and black paste and using an edible ink pen for his body.

The windscreen was a plain white bit of paste left on a curved bit of sponge to set.

To make the lightsabre, I painted a candy stick using edible lustre and blossom tint mixed with almond essence.

4. Finally, on the day itself, I positioned Luke in his seat with the lightsabre close to his hand, the windscreen was stuck down using the sugarpaste solution and the droids were simply positioned at the back, not stuck down.

I decided to go a step further by modelling Lego blocks to hold the candles.

I must say that I am rather pleased with it and so is my little boy. 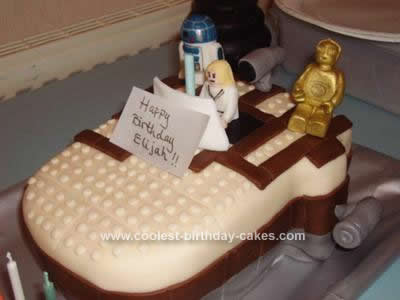