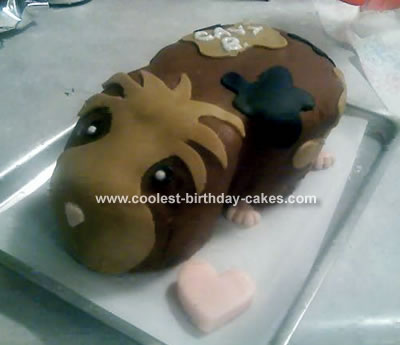 I made this Guinea Pig cake for my one of my best friends birthday! We both work at a pet store and love animals but she is absolutely crazy about guinea pigs and owns two of her own!

It was actually pretty easy to make once I came up with an idea of how to sculpt it. I did some sketches on paper to get a good idea of what I wanted it to look like. I used a regular sized loaf pan and baked a vanilla cake. After it cooled I just cut out a head and the rest of his body. I kind of angled the face downwards to look more realistic and gave him a fat little body.

After that I spread a thin layer of chocolate icing for a crumb layer and then covered him in brown fondant that I had rolled out. The fondant set was a “skin color” set that contained brown, tan, pink and black.

Next, I cut out different color blotches and put them on his back. I used tan fondant for his face and fur on top of his head and black fondant for his eyes. I made his little feet out of the pink fondant as well as his nose. For the final touch I used white gel icing for part of his eyes and wrote my friend’s nickname “cavy b” on one of his colored spots!

It turned out cuter than I ever thought and everyone loved this little guinea pig cake! My friend never ended up eating him because he was too adorable to cut into!