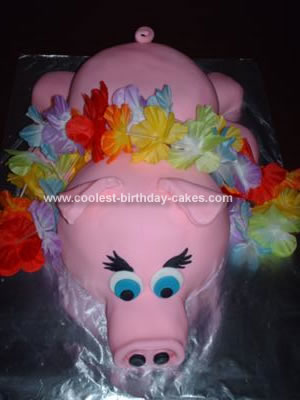 I work in a facility with children. We decided to have a summer camp this year for them and the last day was a Luau Party. Since we couldn’t roast a real pig, I decided to make them a Luau Pig Cake. This was my first ever attempt at making anything like this before and was quite impressed at my determination and time to do this.

I gathered my idea from a few pics and hints on this site. I used two cake mixes, strawberry supreme, two packages of fondant and two buttercream mixes. I baked two 8 inch round cakes and used two stainless steel mixing bowls (one smaller than the other) for the shape of the pig. After cooling, I cut out the shape and crumb coated the cake. I used extra pieces cut from the cake for his little legs.

I then rolled out the fondant, tinted bubble gum pink, to cover the pig. I also used and tinted fondant for the snoot (nose) holes, eyes and eyelashes. Also used fondant for his ears (after on the pig’s head used rolled paper towels so the ears would lay over a bit, til dry). And the tail, rolled out a long rope and wrapped around a metal round rod til dry, then attached with buttercream and toothpick. Used buttercream to attach the fondant to fondant.

The lei is a decoration from the party. The kids did not know it was cake until I told them. Then they were ready to dig in!