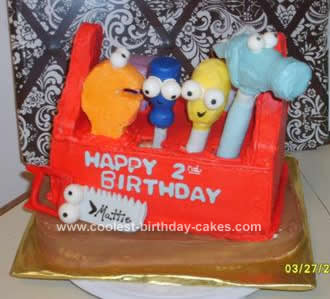 My brother asked me to make a cake for his son’s second birthday. It’s been a long time since I’ve had very little ones in the house so I asked what he was “into” these days. He told me Handy Manny. I had no clue who Handy Mann was, but after a short web search I found out!

So my bright idea was to make the Handy Manny toolbox and the tools that go with the box. Starting at the top, the “toolbox” itself is a 13 x 9” cake cut in half, stacked, with butter cream between the layers. I then crumb coated the box and set it aside. The sides of the box are rice cereal, cut into the general shape of the side of a tool box. I did have a small utensil box (the kind you use for picnic ware) that was about the same size as my cake box, so I traced that on paper and made a pattern for the box sides. I frosted the sides white, attached each end to the cake “box”. I finish coated the entire cake with red butter cream, cut the holes for the tools and the whole cake spent the night in the fridge getting cold.

Next, the tools – I could have taken the easy way out and just bought the figures but I couldn’t find them! Each tool is completely edible. The wrench (Rusty) is made out of rice cereal and was a challenge. I did manage to find a dancing Handy Manny tool set, which I purchased and used each tool as a model. I frosted Rusty white, let set, and final coated in orange. Next, it was the saw (Dusty). That was easy! White fondant tinted with a touch of black to make a gray blade, a red handle out of fondant and eyes. Poof! He was done. Next tool please! That was Felipe, the “Phillips head screwdriver”. He was pretty easy as well, with a fondant handle and a pretzel rod covered in gray fondant. The hardest part was not crushing the pretzel rod inserting it into the fondant. Turner, he’s the flat head – he was easy as well. Stretch (the tape measure) was a ball – two brownies frosted in purple butter cream. Pat (the hammer) almost sent me over the edge! It was the hardest of tools because of the shape and the “claws”. I made that one twice and had to bring in my husband to help. The pliers (Squeeze) was made out of green tootsie rolls for the handles, and gray fondant for the head of the pliers. All eyes were fondant balls and the centers were painted black with edible markers. The lettering was done in fondant as well. The only thing missing was the tool box handle – which was a butter cream frosted pretzel rod. By party time, I could not make it stay in place so we left it out. The holes for the tools were also hard to gauge since I cut them before making the tools. Note here – don’t make the holes until the tools are done. The tool box then went onto a yellow sheet cake done in chocolate butter cream.

I knew I had done it right when I set the cake in front of my nephew and his only comment was, “Handy Manny! I eat it now!!” The entire Homemade Handy Manny Birthday Cake took the better part of two days because of the fondant and the need for it to dry. I would do it all again in a heartbeat! For all the hard work, it was great to see my nephew’s reaction. 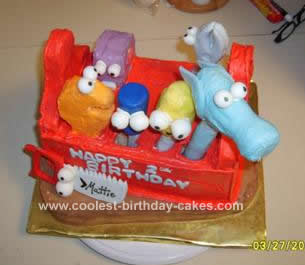