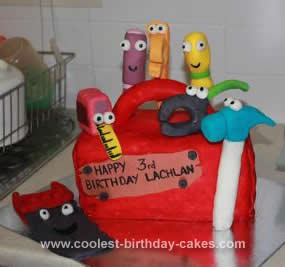 My son loves Handy Manny so I thought I would attempt to make him Manny’s tool box for his 3rd birthday. I baked 3x 15cmx23cm sponges. I made these a few days before then froze them (as I have 2 kids I was trying to do it in pieces just to make it a bit less stressful for me). I then stacked them on top of each other (some shaping was needed to make it level).

I put buttercream in between each layer. I also made the tools a few days before than put them in an airtight container. I originally wanted to do the tool box with sides and I was going to slide a piece of PVC pipe (covered in fondant) thru each side, but that didn’t work out. I had seen on this website that a lady made the sides from cardboard covered in fondant (if you are that lady and read this write up can you tell me how you did it?).

Once that didn’t work for me I had to think of another idea. I went back to basics and made a roll of fondant (this was going to be the handle). The handle had wire in the middle as did all the tools. I had a bit of drama with the screwdrivers as they were very heavy (I just added extra wire thru the middle to hold the weight). I made marshmallow fondant to cover the cake. I had previously used marshmallow fondant with other cakes I have made but used powdered food dye to colour it but I found that I had to use too much powder to change the colour so this time I just covered the cake, then made a thick paste with the powder to colour the cake. I used gum Arabic (I think it’s called that) to join everything together. I used toothpicks to join the eyes (as I was running out of time).

My cake may not be perfect but my son loved it to bits. His comments on the day I will never forget. The 9 hrs plus I spent making this cake makes it all worth while! 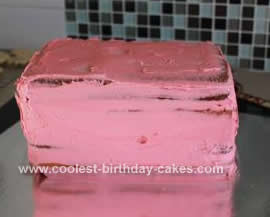 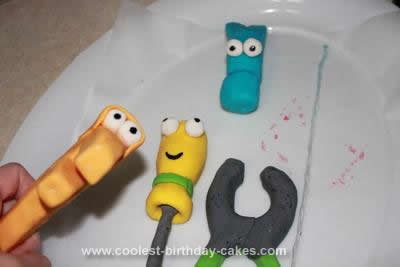