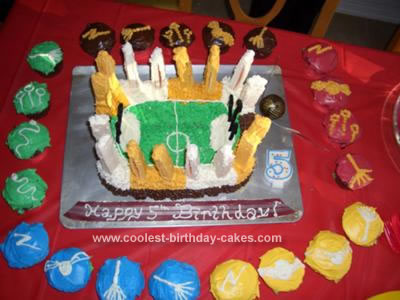 My husband and I love to go all out for our children’s birthdays. We do our best to create the atmosphere of whatever theme our child has chosen for that birthday.

Harry Potter was one of our favorites. Our house became Hogwarts castle with floating candles and moving staircases. We decided to make the Quidditch stadium for his cake. I used a pre-made stadium pan that I found at Bed, Bath, & Beyond for Superbowl time and a paused picture of the stadium depicted in the “Chamber of Secrets”.

I used 2 cake mixes to fill the pan and bake the cake. It was a little too much batter. It really needs about 1 and a half mixes. I baked the cake the day before I decorated it. When I flipped over the pan, the cake cracked a bit, but I was able to basically salvage it.

Using pre-made frosting and Wilton coloring gels, I made the various colors. The green field was made of the white frosting and leaf green Wilton color. I piped it using a medium star. The cake was difficult to decorate because of the angle of the inside cake opening. There is no cake in the middle, I simply piped the green field on the cake sheet with foil on it.

The base of the stadium was decorated with chocolate frosting using the same “star” tip. The projecting stadium towers were decorated with alternating colors of white frosting and white frosting tinted with yellow and brown to create the gold color. I was going to color the towers with the different house colors but decided not to do so because there would be too many colors. I did that for the surrounding cupcakes instead.

The towers are made out of wafer cookies that I iced and then piped stars around the edge. The frosting proved to be too heavy for the wafers and the wafers started coming apart by the time the towers were placed on the cake. I decorated them the night before, hoping to cut some time from the decorating but I’m not sure it worked the best.

The Quidditch rings were made of black chenille pipe cleaners and then placed in the cake. The white midline and the goals were made with white frosting and a small circular piping tip. The golden snitch was unfortunately too big for the cake so it stayed to the side of the cake as an extra decoration.

It took about 6 hours to make the cake. What we do for our kids?!