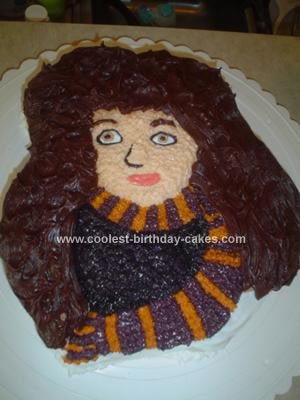 I make all of my childrens birthday cakes, and my daughter just had to have a Hermione from Harry Potter Cake so I had to uphold my end of the bargain.

I used the Wilton Little Mermaid cake pan, tweaked a few things and made the image into Hermione. I started off by putting frosting on the lower half of the cake from her chin all the way to the bottom of the cake. I then traced a scarf pattern into the frosting with a toothpick.

The red hair that wrapped around Ariel naturally became a scarf that wrapped around Hermione (don’t ask how I came up with that, but it worked). The face on the mold I made a little rounder so it didn’t look so much like a cartoon. This took just dropping the jaw line a little.

The eyes I made a little more oblong and less like a princess. The hair-Hermione is known for her bushy brown hair so with that, I made the hair really full. I used the Wilton tip #16 for the entire face and scarf, and the tip #48 for the hair.

I wasn’t sure how the cake would turn out, but I think I pulled it off, my daughter was thrilled.