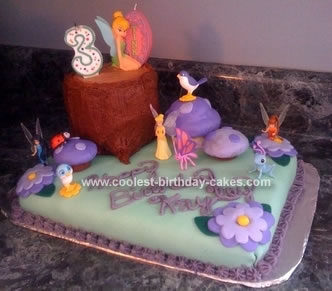 I made this Homemade Tinkerbell Birthday Cake for my daughter’s 3rd birthday and I had so much fun designing and making it! She LOVES Tinkerbell, so I got her the tree house play set as a gift, which came with a figurine that was the perfect size for the cake. I bought the other fairies separately and each came with a “friend” (i.e. ladybug or bird), so once the cake was gone, she got to keep all the toys for her tree house.

The base is a 9″x13″ marble one layer cake covered in buttercream frosting under store-bought fondant. The hardest part was coloring the fondant green. It took lots of time and lots of elbow grease! (My husband had to help with this part.) I made homemade marshmallow fondant (found the recipe online) for the other decorations, which was easier to work with and tasted SO much better!

My guests ended up peeling off and tossing the store-bought fondant, so I will definitely make my own next time. It’s worth the time and the mess!

My favorite parts of the cake are the tree stump and the mushrooms! They turned out better than I thought and were so easy to make. For the tree stump, I baked chocolate cake in a loaf pan. Once cooled, I cut it in half and stacked the pieces (held together with chocolate frosting). I then took a serrated knife and “carved” down the sides to make a cylinder.

The mushrooms were easy too. I overfilled three cupcake pans (two miniature and one regular) so that the tops would overlap. I cut out circles of colored fondant and molded it over the top and sides. I used small circles of fondant for the spots. Then I covered the stems in frosting and stuck them to the base, so they wouldn’t topple over.

Everything was held together with lots of buttercream frosting, you can never have too much frosting!

I did have a hard time cutting up my masterpiece, but the cake tasted AMAZING! Oh well, I’ll just have to make another one next year!

Thanks for looking and hope you can use these tips for your little girls, too! 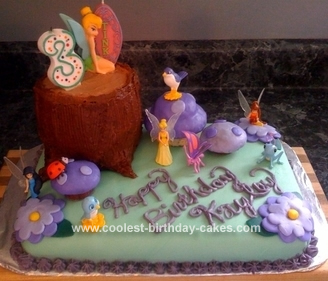