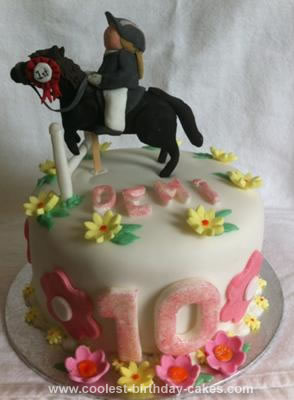 This Horse Cake was baked for my niece, who loves horses. I started by making the horse a few weeks before I baked the cake. I used ½ flower paste and ½ fondant which I colored dark brown.

I molded the body and the head in one, this needed to be dried out upright so that one half the body didn’t dry flat. I cut a potato in half and covered in foil, using two lollypop sticks pushed into the potato, I pushed the body on making sure the sticks don’t poke through the fondant body. This was then left to dry out overnight.

I made 3x long thin sausage shapes to be attached as a fence on the finished cake. These were left to harden. The next day I made the legs, making sure I pressed them against the body where they were to be fitted so it would be a flush fit. I did this with all the legs. I then made some ears and glued them on with dark brown royal icing. The tail was then made and glued on.

The next day the legs were attached. I then made a rosette and left this to dry. I made a harness and saddle and glued them to the horse. This was then left to dry out for a few days. I then colored some ½ flower paste, ½ fondant in black and ivory and flesh and light brown, which I made the body shapes out of.

I then made 3 x 8” cakes and attached them together, one half with jam and the other half with butter cream and then covered the whole cake with butter cream and set aside in the fridge to harden. I then covered the whole cake in white fondant, and made some yellow flowers to go around the top of the cake and then I pipe iced around the base of the cake and made some smaller yellow flowers for the bottom edge of the cake. I made a few pink flowers and cut out the name and number 10.

The numbers and the letters were covered in edible glitter. When the flowers were attached to the top of the cake I then pipe iced in green some leaves and then attached the horse and the fence, then the letters and then the number 10 to finish off. I cut out some large petal shapes to place around the edge of the cake.

The cake was now finished. Hope she liked it. I was really proud of the finished result. 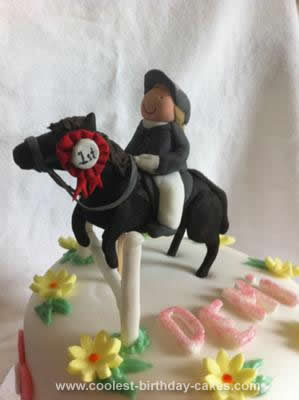