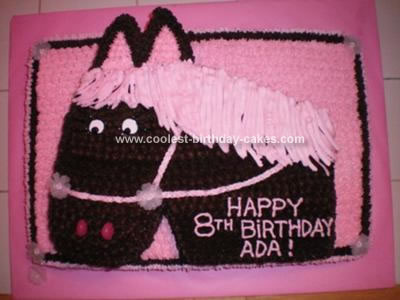 I made this horse cake for my niece who had a horseback-riding party for her 8th birthday. I got most of my ideas from looking at some other horses on this site, but the main difference was that I made a huge sheet cake to put underneath the horse, due to the large number of people expected at the party.

I cut out a stencil for the horse, laid it on the cake which I had previously frozen (this makes it so much easier to cut), and cut around it to make the horse’s head. The pieces I cut out became the horse’s ears. Also, the cake was marble, chocolate and strawberry cake mixes, which looked really cool on the inside.

The entire cake was covered in stars (which took quite a long time due to the large size of the cake!). I used the Wilton buttercream icing recipe for the pink and the Wilton chocolate buttercream recipe for the brown. The bridle was pink ribbon that I bought and braided, and the nostrils were pink jelly beans. I used the star tip for most of the cake, and the petal tip to make her mane.

This was a girl horse and if you look closely you can see her eyelashes! I also bought some little pink flowers to decorate the face.

My niece really loved the cake and it was overall a big hit at the party!