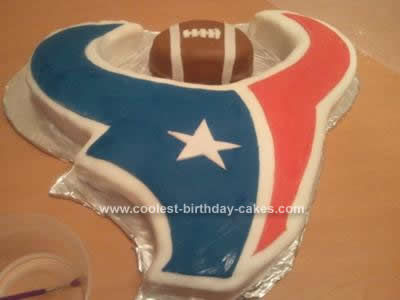 This Homemade Houston Texans Football Cake Design is my second attempt at a fondant covered cake. My first cake was for my son’s birthday and it was a Super Mario theme. It was square with fondant cutouts, its number 73. I was very happy with the results and I had paparazzi! Wow it was an awesome feeling and I wanted more. I had a pot luck at work coming up for Thanksgiving and the first thing you think is turkey, pie, and football. I was thinking of the same thing anyone would, a square or circle with fondant cut out turkeys and leafs that you would expect to see in a magazine or any dinner table. Well not this guy, I had to make an impact I had to take it up a notch on the difficulty and well just show off my newly found hidden skills.

I am not an extreme sports fan, no face paint or weird get up for me. I thought of the home team and went with the logo it looks awesome and though it would be cool to make a cake just like the teams logo. I have a back ground in graphic design; I used to work for a print shop and made my own t-shirts at one point. I used my software to make the logo and print it out on card stock taped it together and cut it out. I made three, one for the foam board base and another for the cake and then the different colors and star.

The cake was the decadent chocolate cake with chocolate mousse. I made some butter cream frosting to dirty ice the cake but I added some chocolate to it. The tips of the horns were too delicate to handle the weight of the fondant so I made them out of rice crispy treats. I am still having a hard time to get an even thickness of the fondant with a large piece. The Houston Texans cake was awesome! And once again I had paparazzi! With Christmas around the corner it’s just another chance to practice. 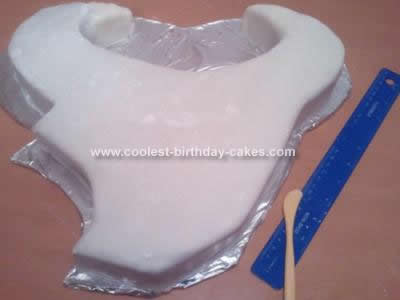 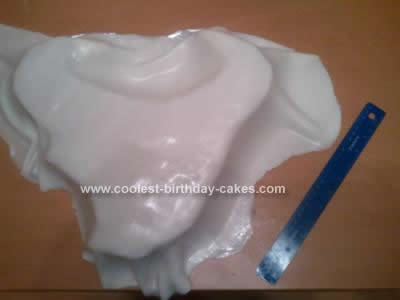 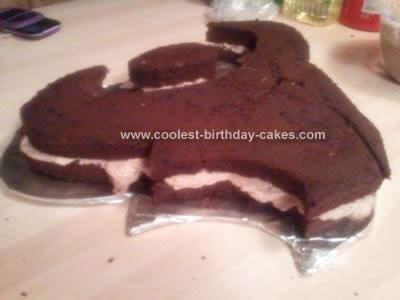