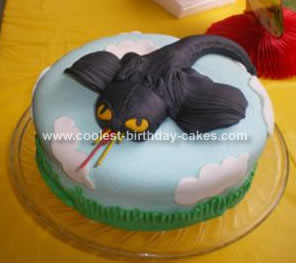 My husband took our children to see “How To Train Your Dragon” and they were immediately smitten with the movie. My son’s birthday was coming up and when I asked him what kind of cake he would like he said he wanted a dragon cake. When I asked him his favorite he said that “Toothless” was his favorite character.

I am a novice at fondant but knew this was the way to go for me to achieve the effect I wanted for the homemade ‘How to Train your Dragon’ cake. I purchased pre-made fondant for the Toothless character. I used Wilton black coloring gel for his body and yellow for the eyes. I would have liked for his wings to have hardened in a more in-flight position but I am still pleased with the results. I took wrapping paper cardboard tubes and cut them to place under the wings to give them a lifted look.

I used toothpicks to hold the head and legs to the body. When researching what he looked like I looked up pictures on-line and also purchased a How To Train Your Dragon coloring book that gave me a couple different views of his body. I made the dragon a week and a half prior to his birthday and stored it in a plastic container.

Two days prior to my son’s party I made homemade marshmallow fondant and colored it sky blue. The clouds and green grass were leftover fondant pieces from the store-bought fondant. I used butter-cream frosting underneath the fondant on and between the layers of cake. I was worried about the taste of the fondant but I got repeated comments about how tasty it was.

Awesome Homemade How to Train Your Dragon Cake

Cool Homemade How To Train Your Dragon Cake

2 thoughts on “Coolest How To Train Your Dragon Cake”