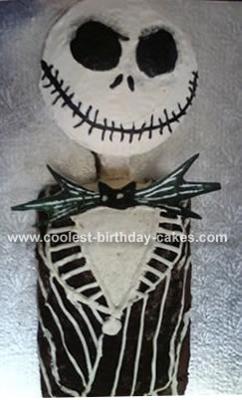 I have never made a decorative cake before, this was my first. My son loves Jack and I thought this Jack Skellington cake would make for a great 5th birthday cake. I came online and found this site.

I started with two circle cakes and two rectangles. I stacked the circles and laid the rectangles about two inches from them. I trimmed the ‘body’ to look skinny and used the extra cake to make his neck.

I used chocolate icing as the filling in the middle of both stacks. Then I used homemade buttercream icing (I honestly don’t know the recipe because I just kept adding things until it tasted good) and iced all the body. After the body was iced I used Oreo cookie crumbs and a piece of paper to design his jacket. I then iced his head and used Wilton black icing to do his mouth, eyes and nose (I dipped my finger in water and pressed the mouth, eyes, and nose after to get a cleaner look).

The piping on his jacket was tough; once I realized is would roll off the cookies crumbs instead of stick I had to spray a light mist of water to make the cookie crumbs sticky. Then the piping stuck. His bow is cut out of paper with some icing on it.

It was a huge success and I have remade it about 3 times for other people. 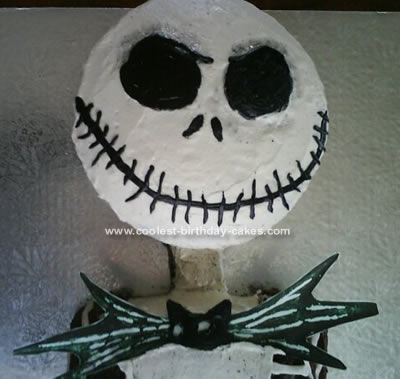