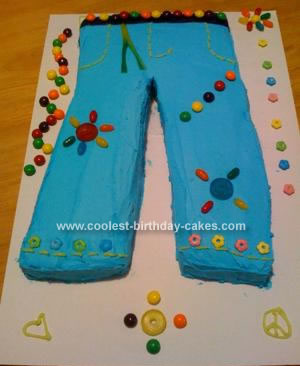 I saw this idea for a Jeans Cake on the Betty Crocker website and thought it was cute so I decided to make a practice cake. I used a 13×9 pan and trimmed the edges to make the belt and cut the cake in an inverted “V” shape for the legs.

I tinted some frosting blue and bought a bunch of candy at the party store for the decorations. The only problem was in the crotch area of the pants. It was hard to frost in there! But since it was only for practice I didn’t worry too much about it.

As my family cut into it, it became shorter and shorter. I joked that it was now a pair of “hot pants”!