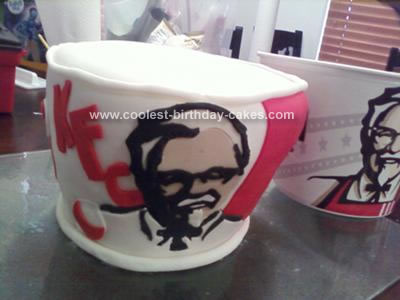 I had made just a few plain cakes and my little sister came to me and said she told the people that she works with (KFC) that I would make a bucket of chicken cake for her Christmas party. I said ‘ok, but you are going to help’.

First I thought I would have to get an empty KFC bucket for a sample. I then made several round cakes filled and put them together. I then cut my cake to shape. I iced the cake and placed fondant on it.

I could not think how I was going to get the col. sanders to look right… so I thought I would cut the pic out of the bucket – cut it into templates, then place them on black fondant and cut them out and put it on the cake. Once this was done it came together quick, I cut out red fondant strips and rolled fondant white and put on top and bottom for the rim.

I then cut out circle shapes because it was a party and put on the back side. I took chocolate and yellow cake that I had carved and crumbled them then put a small amount of milk in it and formed some chicken. When my sister took the homemade KFC bucket of chicken cake to the party she put ‘chicken’ cake on the top. Everyone said they didn’t think it was cake.