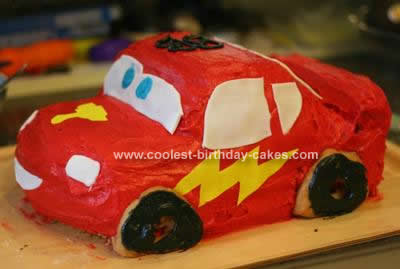 When I asked my son what he wanted for his cake for his third birthday, I was expecting him to say “chocolate”. Boy was I surprised when he asked for Lightning McQueen and Tow Mater from the movie Cars. So I try to clarify: ” you mean a cake with toy cars on top, right?”. “No mom, I want cars made out of cake.”

Now I love to cook, and bake in particular, but I have never made a cake that wasn’t round, square or rectangular. But this is the only time my eldest son will turn three.

I started by looking for cake pans in the shape of the characters since they are pretty popular right now, but no luck. So then I started searching the web for photos and found lots. And even some instructions. So I gathered ideas from all over and started baking.

First I had to decide on flavour, since taste is more important to me than appearance. For that reason I also decide to use buttercream icing instead of fondant, because I think fondant tastes like plastic. For Lightning I made a lemon cake with lemon curd filling and a strawberry buttercream. I started by baking 3 rectangular (9″X13″) cakes.

I started this Homemade Lightning McQueen Cake by stacking two of the 9×13 cakes with lemon curd filling. I then carved the general shape with a curved front, slight narrowing in the middle, and wheel wells. Then I cut the third cake into three pieces. The two bigger pieces were stacked to make his cab and a long, thin one became the spoiler. The spoiler is held on with two bamboo skewers.

Then I did a LOT of carving with a serrated bread knife to get this. I wish I could post step by step photos of the carving because I know I was hoping to find someone online, but I really just went slowly while referring to one of my son’s toys.

Then I iced it with strawberry buttercream (butter, icing sugar, seedless strawberry jam) with some red icing dye. The lightning bolt and piston cup are made of yellow sugar sheets. The wheels are sugar donuts cut horizontally with black icing. The windows, smile and lights are white fondant and the eyes are buttercream dyed blue. 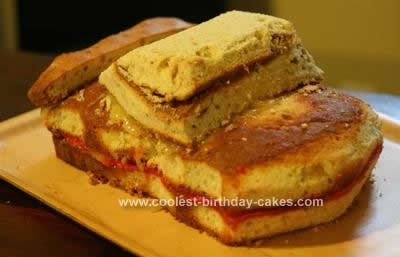