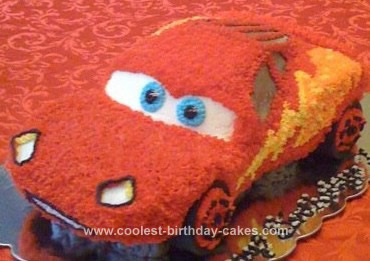 My son was turning 3 and he absolutely loves Lightning McQueen from the Cars movie. I had made a Thomas the Train cake for his 2nd birthday that turned out real well so I decided to tackle a Lightning McQueen Birthday Cake.

I used a sheet cake pan (12 x 18) for the body of the car and a loaf pan for the top section (windshield, side windows, etc.) I mixed two cake mixes for the sheet pan and one for the loaf pan.

The sheet cake I cut while it was still in the pan. As if you are looking straight down from above, I cut out the body shape. The pieces that were left in the pan on each side from where the car indents on each side were used for the section of the car above the back wheels that curve to the tail fin. Then I carved the “cockpit” section of the car out of the loaf pan.

Using pieces of cake that were left over I made a base to go under the body so the car would appear to be sitting on its wheels. I used gray icing to cover this base to simulate a road. I had planned to use Hostess Ding Dongs for the wheels but had gotten way too ambitious and the cake was too large. The Ding Dongs were too small. I then planned to cut round pieces of cake, but found a Lightning McQueen game of my sons that had perfect size wheels. I wanted the entire cake to be made of cake, but the tires from the game were too perfect.

After assembling the cake pieces – base, car body, then cockpit, I cut wheel wells out of the cake body to accommodate the plastic tires. The Ding Dongs still came in handy as I used them to fill out the hollow inside of the tires.

Then using white icing I iced a smooth layer over the windshield section, then with gray icing I iced a smooth layer over the back windshield and side windows. The blue of the eyes I used a small round tip, made a circle and filled in. The black outline around the headlights, the hubcap details and the pupils of the eye were done with a round tip as well. The rest of the cake is done with the star tip. I used orange at the back of the lightning bolt and blended to yellow at the front.

It took me about six hours to make, but seeing my son’s face when he saw it for the first time made it worth it. He smiled and said “It’s Lightning!” That made the hard work worth it.