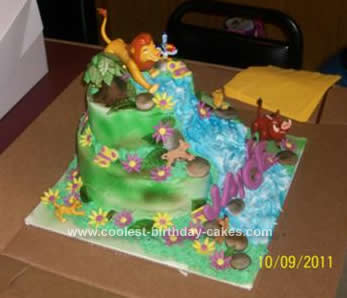 This is a Homemade Lion King Birthday Cake I made for my best friend’s daughter’s 4th birthday. It was a 2 tier, 10 and 6 in round cakes. The tiers were stacked offset for the waterfall effect. The bottom tier was strawberry and the top tier was white with buttercream icing.

The leaves, rocks, daisies, butterflies and trees were made of fondant and cut out with cookie cutters which were made the nite before so that they would dry and be useable. Each tier was double layers with buttercream icing centers. I sprayed a lite brown layer of airbrush food color then applied a green layer to give it some depth to the color.

For the waterfall I put buttercream icing running down the front of both laters onto the board and then sprayed some blue airbrush food color. Then took a spatula and swirled the icing to give it a water effect. The Lion King toys were bought at Walmart and placed with repect to the movie.

All in all I thought the cake turned out fantastic and the main person (the birthday girl Jaycee) loved it. 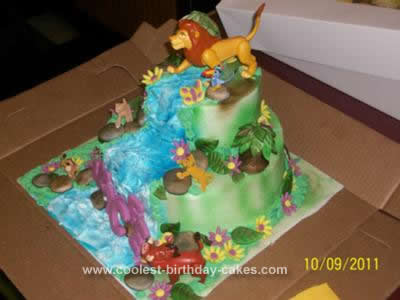 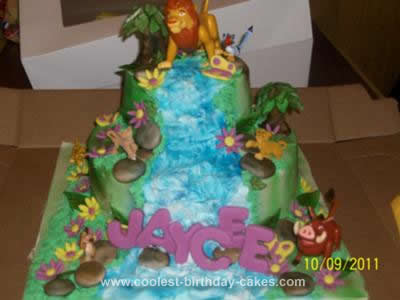