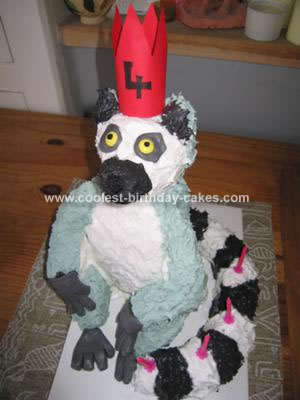 When my daughter turned 4 she was into ‘Madagascar Escape to Africa’, especially King Julian so I thought I’d make a Homemade King Julian Lemur Cake. It turned into a huge job, I’ll never again make a cake with arms! Actually, it only took 2 square cakes and 1 round cake (for the tail).

I made sponge cakes with 200g butter,200g caster Sugar, 4 Eggs and 200g Self Raising Flour. Beat butter till soft, add sugar and beat again till light, lightly mix in eggs one at a time, with a little sifted flour each time. Fold in flour with a metal spoon and mix. Bake at 160 degrees centigrade or 325 Fahrenheit for 45 mins), push a tooth pick or match in, it should come out clean if done.

PS can substitute 25g or more flour with cocoa (not drinking chocolate) to make it a choc one :-)

I froze the fresh cakes until the day before the party, as it’s easier and less crumbly to cut them up. Looking at our Lemur toy I worked out some template shapes on A4 paper and cut them out to put together as you see in the photo, holding them together with apricot glaze (or smooth jam) and LOTS of tooth picks, remember to count how many went in and come back out. The tail was cut from the two halves of the round cake, the head was fiddly to shape, and the arms where a worry to keep from falling off but it worked. I made butter icing for the grey, it tastes great and is easy to apply, but ALWAYS make more than you think you need because it takes ages to mix up.

On adding the black colouring to the yellow butter icing for grey fur, it turned out green! After messing about with blue colouring and more black, I got it to something like grey (you be the judge). Then for the white tummy and tail stripes I used Royal Icing sugar from a box, which I had to hand whisk (phew) and on application it started to run down the tummy, but finally set.

For the hands and feet I mixed black colouring into a packet of set icing, rolled it out and cut them out, then pressed them onto the butter icing. Then it went into the fridge overnight, so by morning the cake is nicely defrosted and the icing set.

This Homemade King Julian Lemur Cake was my ‘never again’ cake, but she loved it (after first saying “but I wanted a Winnie the Pooh cake”…, and a year later still talks about her Lemur cake. 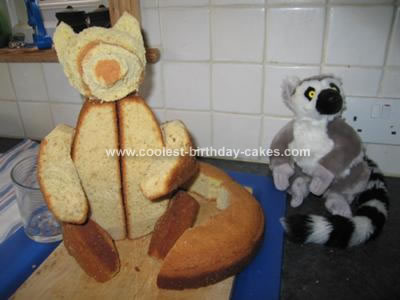 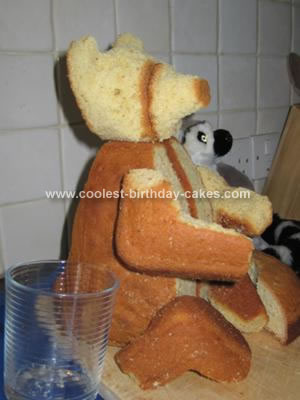