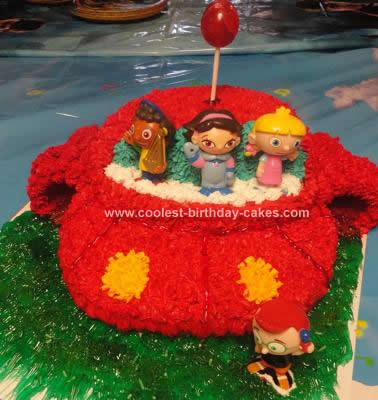 This Homemade Little Einsteins Birthday Cake is a basic vanilla recipe. I didn’t want anything crazy because it was for a 2 year old. I used a glass casserole dish for the base, try to find one that resembles an egg. I filled it about 1/4 full of batter. I then used a 9″ cake pan [just one!] for the top layer. I shaved down the sides of the 9″ pan to better round it.

I used a white icing in between the layers to keep them together. Though I wish I would’ve had a fruit based icing [those are delish!]. I cut out the window on the front instead of having just a blue window, so that the figurines could sit in it. I used a buttercream icing recipe and colored it with Wilton’s no-flavor red, because red is the hardest to color. It tends to look pink. But I used about 3/4 of the bottle by the time I got all the icing I needed colored. That alone gave me a workout and a half! I used red piping gel to make my basic outline around the window, and the small circles in the front for the headlights.

I placed two large ice cream cones on the side for the rockets. Using the star-tip I went around and covered the cake and ice cream cones with red stars. I then added the white icing stars on the bottom of the window, where I would be placing the figurines, and then did the sky blue icing on the back wall of the window. I used what I call the spaghetti tip to make the grass, and added green sugar crystals for more definition on the grass. To finish off I stuck a red lollipop in the top for the antenna and placed the figurines on the cake. I used piping gel to write the happy birthday and to add musical notes to the cake board.

I hope this helps anyone trying to make one of these, it really wasn’t that difficult at all!! 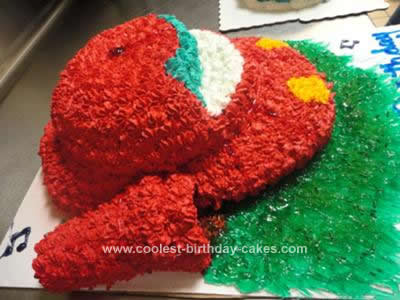 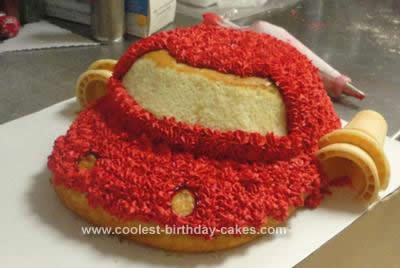 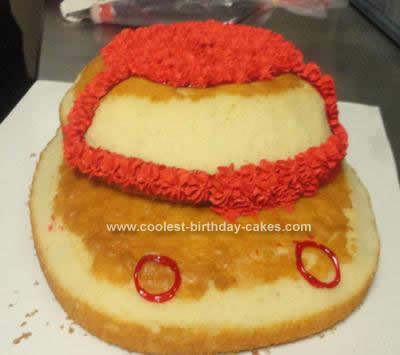