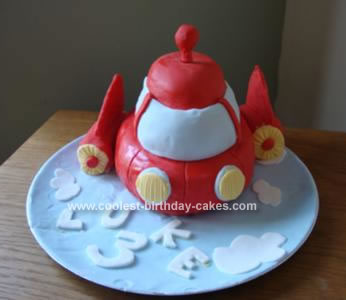 I took two oval shaped pans, one larger than the other, made a Madeira cake (or pound cake). As soon as they were out of the oven I wrapped them in foil and cooled them, then placed them in the freezer overnight.

1kg of red regal icing (I’ve tried to make red icing with food colouring before and this seemed like the easier and less messy option, with far better results)

I prepared the cake board, with some blue regal icing then cut out cloud shapes and letters free-hand. Arranged them on the cake board.

Next the carving. Carving a frozen cake is far easier so I would recommend freezing the cake first. I placed the smaller oval cake on top of the larger oval cake, frosted it lightly with butter frosting, rolled out the red icing and iced the carved Rocket shape.

I then iced the Swiss rolls, which I carved slightly into turbine shapes. I used two cocktail sticks to hold the turbines on either side of the Rocket body. The ‘wing’ shapes were made from ice-cream wafers which i covered in red icing.

I then used a strip of blue icing for the window, then for the window bars two strips of red icing. The headlights were cut out of yellow icing, on top of circles of blue icing. I indented the yellow circles with a cocktail stick to make crisscrosses. A circle of yellow icing was placed on the end of the turbines but before I stuck them on I made indentations with a cocktail stick and added a red ball to the centre.

I covered the lollipop in red icing and stuck it in on the top for Rockets aerial.