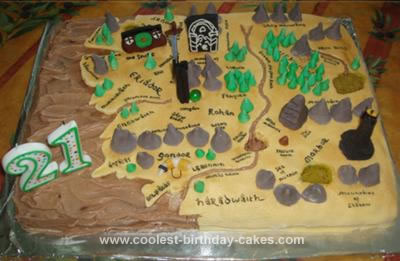 I made this Lord Of The Rings birthday cake for my brother’s 21st birthday. As he loved the Lord of the Rings books when he was younger and then the films, I decided to make a themed cake for him, choosing the map as it seemed the most intricate and creative idea for a cake.

To start off, I made two mandarin sponges which I separated into three bowels, adding green, yellow and pink food coloring to each. I then added spoonfuls of each color to the tin so that when you cut into the sponge, it came out multicolored. I then made chocolate sugar icing to spread across the cake, giving it the texture of waves.

After putting on the icing, I used an icing pen to write the names of the cities and made 3D trees, mountains, and symbols for certain cities. What I enjoyed about making this cake was the creative side; for example using jelly for the lakes and choosing, and then making, an object related to each city. I received great comments but most of all, it was delicious!

Lord of the Rings – Eye of Sauron Cake

1 thought on “Cool Homemade Lord Of The Rings Birthday Cake”