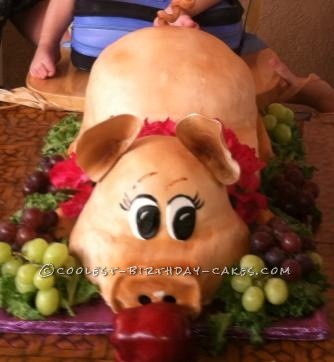 This cake was for my granddaughter’s first birthday. The party theme was Luau. My son and daughter in law thought it would be fun to have a pig for the cake. When they first asked me, I was worried little kids would freak out when we started cutting into the cake.

So, the design for the cake was to use the Wilton ball pan for the head. I used a cupcake to make the snout of the pig. I used a 9 x 13 pan for the body and a stainless steel bowl to make the booty of the pig.  The whole pig is made of cake. I sculpted the body a little to shape it as needed. I made the feet out of fondant and ears and tail out of gum paste.

I covered the entire cake in marshmallow fondant and airbrushed it with a mixture of white and light brown coloring. I also made the eyes out of gum paste. The pig was made to look cartoonish so the little kiddos wouldn’t be frightened of it.  Once I finished the pig I decided to add the apple and grapes to give it a little roasted pig on a platter look.

I have to say it really drew a crowd when we carried it out. Kids and adults thought it was cute and unusual. The crazy part was cutting into it. But all said and done it was a big hit. Not only did everyone say it looked great but said the taste was fantastic. Because the cake was baked in several different pans I was able to make several cake flavors and fillings so people came back for second and third helpings.  They wanted to taste all parts of the pig.

Sometimes you just have to have fun and let your imagination take over. Hope you enjoyed this idea.