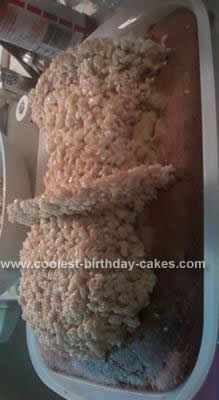 This Homemade Madd Hatter / Cheshire Cat Cake was created for sister in law’s fourteenth birthday. She told me she wanted a Madd Hatter birthday cake with a twist. She didn’t know what exactly she wanted until she came to me with a picture from the 2010 Tim Burton film of the Cheshire Cat wearing the Madd Hatter’s hat. I didn’t know exactly how we could make that work until I thought to myself how about a 3-D version.

This cake was put through everything but in the end although dried out it looked super cool and she was very happy. We started with box of cake mix which she baked and forgot to spray the bottom of the pan so when she tried to get it out it did not and fell apart. We pieced it together and the bottom looked OK. So the cat head and hat portion were made out of rice crispy treats original recipe. 3 Tablespoons of butter melted on low, adding one 10 oz. bag of Marshmallows slowly and constantly mixed over low heat until melted. Then we poured it over 6 cups of rice krispies. While making the rice krispies my 2 and half year old ate a handful of the cake itself. So we filled in the empty spot of the cake with the left over rice krispies.

To mold the head we used a buttered plastic flimsy bowl with the mixture and squeezed it in our hands for about 10 minutes. To form the hat we just poured the mixture on top of the cake and used our fingers to form the brim and top of the hat.

From there we used the 18oz. box of store bought fondant and coloring to create the colors. We didn’t end up getting the green of the hat dark enough but she was happy with it. Then we rolled out the fondant on top of powder sugar dusting on the table and used a can of frosting to cover just the cat and hat portion of the cake and placed the fondant on top.

When we finally finished cutting out the teeth we frosted the actual cake portion with chocolate frosting. The entire cake probably would have taken maybe 6 hours. But for us it took 3 days to complete. The cake turned out great especially since she just wanted it to take a picture of and post for friends. Our family just took the hard cake and crumbled in bowls of milk still tasted awesome but not quite like it would have if we had made and eaten it within one day. 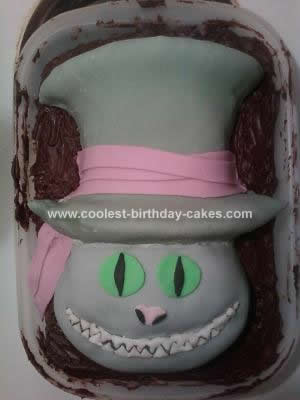 Coolest The Cat in the Hat Cake