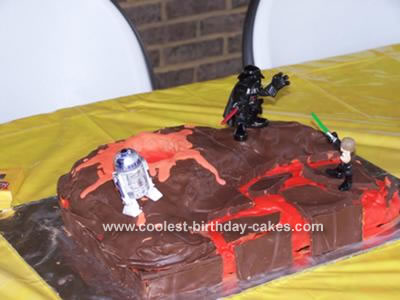 This is the Star Wars cake I made for my son’s 5th birthday. He is very into the Star Wars Lego game and wanted his party themed after that. Since he has a medical condition that affects his diet, making his cake is always a must.

I started by baking a cake in a 9 x 13 pan and then inverting it on to a piece of cardboard wrapped in aluminum foil. I put it in the freezer for a while to make it easier to frost. I then iced the whole thing with orange icing. When tinting the icing, the brighter the color the better.

Meanwhile I mixed up a recipe of rice krispie treat but instead of putting them in pan I shaped them into the terrain I wanted on half the cake, making sure to include a bg mound that would become the volcano. Once the rice krispies set I used a biscuit cutter to cut the center of the volcano out. I melted chocolate almond bark and poured it over the rice krispies. Once I covered the rice krispies I used the left over to pour into a flat layer on a sheet of wax paper.

Once the rice krispie/chocolate section was all set I placed on top of the iced cake. I then cut up the sheet of almond bark chocolate I made into sections to float in the lava an placed them on the cake. I then microwaved the remaining orange icing to make it thinner and poured it into the volcano opening and down the sides.

I wasn’t able to find actual Star Wars Lego characters to put on the cake so I used some other character that we had on hand. Of course all you true Star Wars fans out there will notice, as my older son did, that I used the wrong characters for this scene. It was actually Anakin and Obi Wan that fought on the lava field not Luke and Darth Vader. Fortunately, my 5 year old wasn’t that astute. He just knew it was a cool cake.

Everyone at the party, especially the dads, were very impressed.