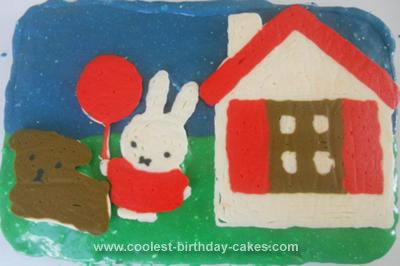 In true Miffy fashion I made a simple carrot spice cake for my daughter’s second birthday. Then I made cream cheese frosting to ice the cake with. For the background I mixed some blue and green frosting using food coloring to create the grass and the sky. My daughter not only loves Miffy but she’s also a fan of Miffy’s dog Snuffy, so I was sure to add Snuffy to the scene that I drew up. Being uber excited about my little one’s birthday, I looked at some Miffy pictures online for inspiration and sketched a picture of Miffy holding a birthday balloon (since my daughter also loves balloons.) I also included Snuffy running along close by as they played outside of Miffy’s house.

Since I am still developing my cake decorating skills, I used the wax paper technique in case I messed the picture up. This is simple; I used a very thin tip on my cake decorating bags to draw Miffy, Snuffy, and the house onto individual pieces of wax paper while changing bags between colors. Then once they were finished I placed the wax paper icing drawings in my freezer for about two hours. This was a perfect amount of time to bake the cake and allow it to cool.

After freezing the decorations, I iced the cake back ground and then carefully placed the pictures one at a time onto the cake. I did the house first because it was the biggest; I pressed my hand gently onto the wax paper to solidify it to the cake and then peeled off the wax paper. I then did this with the Miffy and Snuffy decorations and my cake was complete. I hope to gain more confidence in my cake drawing skills as I continue and skip the wax paper step altogether, but all in due time.