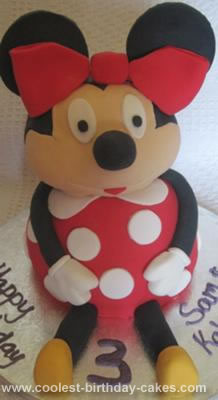 I made this homemade 3D Minnie Mouse birthday cake by using a basic sponge recipe.

I began by stacking the four cakes on top of each other with layers of butter icing. I then carved this in to a dome shape gradually trimming away at the cakes until I achieved the desired shape. Finally I spread a layer of butter icing over the whole cake.

I dyed some sugar paste red using food coloring paste, gradually adding until I achieved the desired color. I prefer these pastes as they are less sticky than normal food dyes and give a stronger color. I covered the cake in this sugar paste, tucking the extra icing underneath trying to smooth out the pleats with a cake smoother.

I cut out some circles from white sugar paste using a cutter. These were stuck to the red body with a small amount of sugar glue. I also cut out a flower shape from the sugar paste to form the frill at the top of the body.

The arms and legs were formed from sausage shapes of black sugar paste. The legs were thicker in size and two balls of yellow icing were shaped into domed shoe shapes with a hole in the middle for the legs to be inserted. Two balls of white icing were shaped into hand shapes with a small hole in the top for the arms to be inserted into. A small sausage of white icing was added to the hands to form the cuff. All of this was attached with sugar glue.

I marked out the face shape using a picture as a guide. Then I added black icing to the back of head using the face shape I had drawn as a guide (this was rather tricky and wasn’t as neat as I would have liked, if I done again I would add the black first then cut out the face shape to stick on). The head was stuck to the body with some butter icing.

I made the ears the night before using a cup to achieve the large circle shapes I inserted a cocktail stick into each so that I could insert them into the cake easier. (I would have been better using wire and making them slightly thicker I think though as they started to break.)

I made the bow from red sugar paste. A red ball shape for the center and strips folded over and shaped then left to set with foam in between to keep the shape. This was also attached with sugar glue.

The cake was for two of my friends little girls who were having a Minnie themed party. I really love this cake even though it isn’t as neat as I would like.