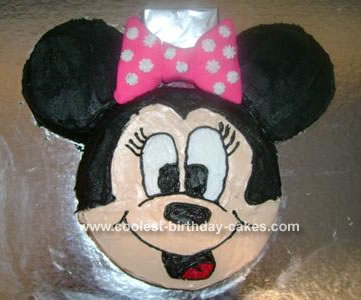 My daughter adores Mickey & Minnie Mouse. She watches the Mickey Mouse Clubhouse every morning. So, I thought that I would make her a Minnie Mouse cake for her 2nd birthday. I could not find a Mickey/Minnie shaped pan anywhere! So, left to my own devices, here is what I came up with:

I used an 8 inch round pan for Minnie’s face & 2 4 inch round pans for her ears. The best tip that I have for baking the cakes is to make sure that the ears are not filled too much & to make sure they are even. Mine came out with one ear much thicker than the other. It wasn’t a major problem, I just carved off some of the thicker cake to even them out. Next, I put the 3 cakes together. I carved a small portion of each ear out to make it fit with the face seemlessly.

As far as decorating, I had read how difficult it was for others to dye their frosting black. I wanted a true black, and didn’t want the hassle of buying package after package of food coloring. So, what I did was buy black decorator’s icing. It is a bit thicker than frosting, so a bit more challenging to spread, but in my opinion, a better option than trying to dye white frosting.

I started decorating by outlining the hairline with a toothpick on the actual cake. Then, I filled it in with the black decorator’s icing. Next, I used the “Dora the Explorer” dye kit flesh color & white frosting to make Minnie’s face. I used a hot knife to even out the frosting. Again, I used a toothpick to draw in Minnie’s features before applying them. I found it a bit tricky to make Minnie’s face round, since on tv she has a pointed chin. To perfect this, I traced the 8 inch pan onto paper & for days before the actual cake decorating, I practiced drawing Minnie’s features until I was satisfied! I found that making her mouth open somehow helped the face look less round.

Minne’s bow is just pink fondant that I shaped into a bow. I used white decorator’s icing to make the polka-dots.

The only problem that I found while decorating the cake was that Minnie’s bow needed some support when I balanced it on the ears. I was short on time, so I covered a toothpick box in aluminum foil & shoved that between the ears to provide the support it needed.

My daughter loved this cake. She was so excited when I put it in front of her!!