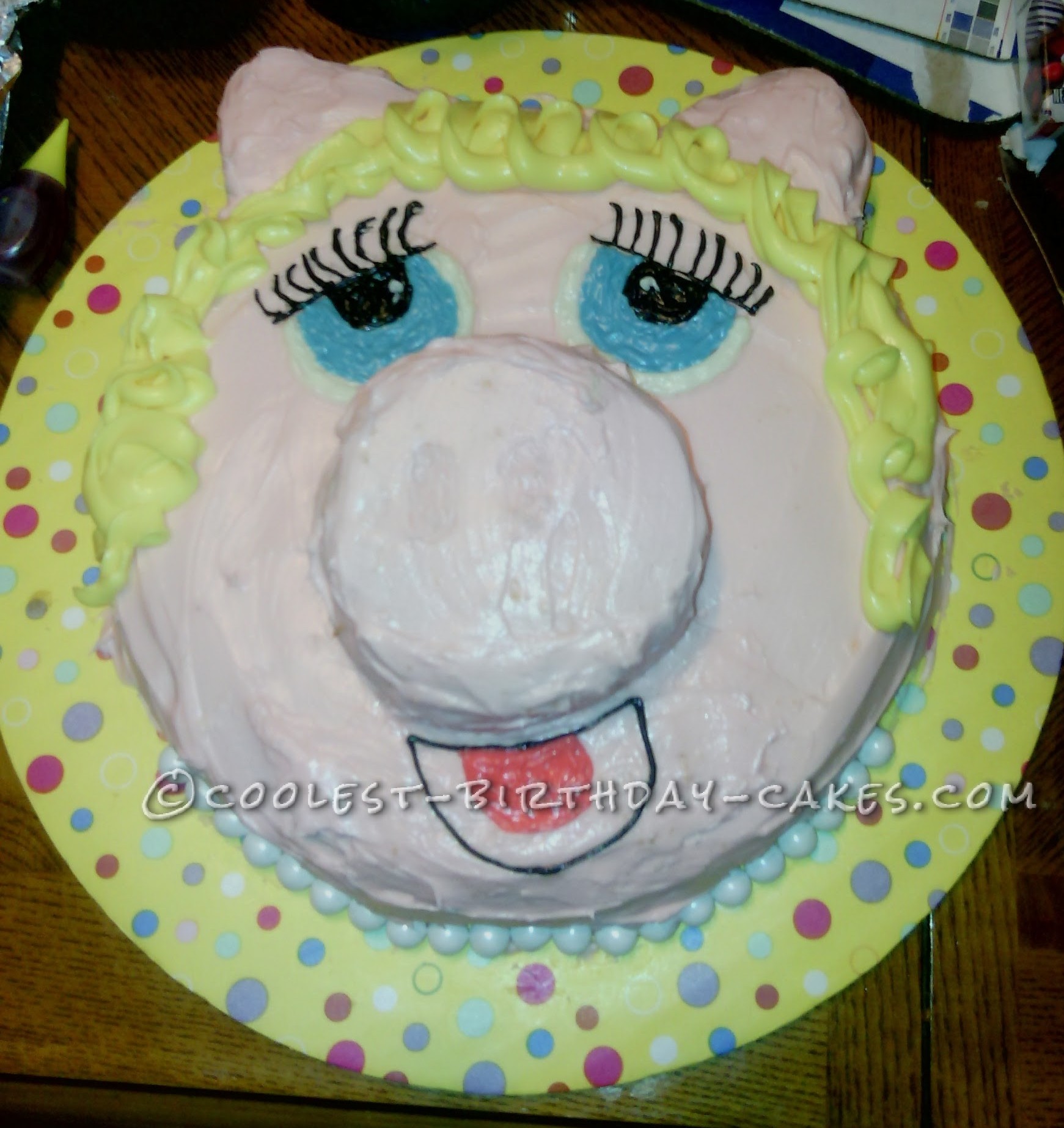 This Miss Piggy cake was made for my father’s birthday. He has always, for as far back as I can remember, been in love with Miss Piggy from Sesame Street. He is one of those hard to pick things out for type of Dads. After much thought and researching many different designs, a light bulb went off and I remembered his love of this character.

This cake was actually one of the more simple ones that I’ve made, but by far the most rewarding. It took only about four or so hours and it’s made from a peanut butter cake recipe that belonged to my husband’s grandmother.

I used two 9 inch round cake pans, using one for her face and the other for the ears and nose. I usually just use household tools such as a cup to measure the eyes and such. Toothpicks are best to draw lines in the frosting where you want to draw. My worry was focused on really getting the frosting the right color. I was using white frosting and mixing food coloring together to get the pink and blue. Her necklace is the designer sixlets that are sold in a small baggie by the cake frostings.

When this cake was finished, I called my niece over to ‘judge’ and to help me carry it to my father’s house (which was a surprise visit). This is when the nerves set in as there really wasn’t much that I had to help carry it in and we had a 30 minute drive ahead of us. So we started out with me driving and her holding it in her lap the best she could. My hand occasionally grabbed for it, but all in all, we made itwith no problem.

At this point my father was downstairs watching television so I went in through the upstairs kitchen. No one was expecting me at all. I think I scared my mother, but I managed to keep her quiet as I quickly showed her what I had. I didn’t want my Dad to be tipped off just yet. I gathered everyone together and asked them to follow me downstairs while singing the traditional ‘Happy Birthday’ tune.

My Dad was COMPLETELY caught off guard. My niece has the video on her phone (I was unable to load it to the website :(.  At first he did not know what is going on and then I gave him this cake. He looked and when he finally realized what it was, he laughed so hard he cried until he could barely breath, in a good way. We had him pose for photos and he was holding the cake almost where it is going to slide right off the board just so it could been seen well. He loved it so much and kept saying he just didn’t have the heart to eat it. But he did and he still raves about the flavor. His face and his reaction were the most precious, amazing thing I think I’ve ever seen.