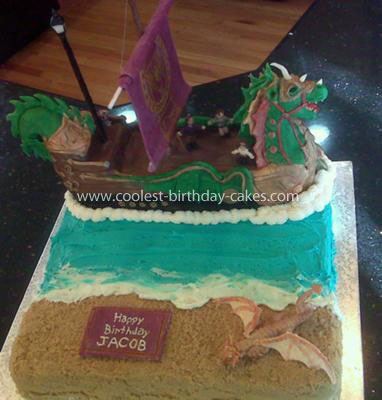 This a Homemade “Narnia: Voyage of the Dawn Treader” Cake. I started with the cake decorations because I could make them ahead of time. I left the cake itself for the day of the party. I Google-searched to find pictures of the ship and characters for reference. Then I made the basic ship shape using Rice Krispy treats. I used the exact recipe on inside of the cereal box. I have read other people leave out the butter so it isn’t too soft. I knew my ship was for decoration, not eating, though everything was edible so I didn’t mind if my Rice Krispy treats were not soft. I wanted them to be hard enough to firmly hold the mast and sail.

After creating the ship shape, I stuck two wooden dowels in to the ship for the mast and lamp post and let it sit out for a day to harden. Then I covered the cake in chocolate fondant (I used “Fonderific” brand, it tastes better than Wilton brand and is more elastic and does not dry out as fast). I made modeling chocolate with precolored candy making chocolate by mixing 2/3 cup light corn syrup into 1 lb melted chocolate for the details on the ship. This was the first time I had ever tried modeling chocolate, it’s easy to use and doesn’t dry out quickly or crack like fondant can. It is also cheap and easy to make yourself.

To make the gold Armour on the dragon part of the ship, I used white modeling chocolate and painted it gold with a mix of powdered yellow food coloring and edible gold dust. You can add a bit of brown food coloring if it is too light. The hardest part of the ship was figuring out how to hang the sail. My husband figured this out for me! First, I cut a rectangle out of rolled modeling chocolate to create a sail shape. I then rolled the chocolate sail around two paper lollipop sticks (top and bottom, like a scroll) and brushed water on the joint to seal it. I wrapped fine wire around each end of the top stick, so it could hang like a picture.

I used an exacto knife and cut into the top of the wooden dowel mast, just about 1-2 mm. I slipped the hanging wire into the groove to hold it up. I put the sail in the fridge until the party to keep the sail firm so I wouldn’t unroll or break. For the cake I baked four Duncan Hines Moist Deluxe chocolate fudge mixes in 2 large rectangular pans (11″x15″x2″). This size pan uses 2 standard mixes. I am at altitude (Denver) and baked for 40 minutes. I frosted one whole cake in blue buttercream for the water. I inserted plastic dowels in the cake to set the ship on so the weight of the ship didn’t dent the cake. I then cut off about 1/3 of the second cake and added it (to make cake square). I frosted it in buttercream frosting and covered it in brown sugar to look like the beach. I spread some white frosting between the blue ocean and the beach and smeared it around into the blue to look like waves in the beach.

I then created cousin Eustace as a dragon out of white modeling chocolate colored with brown powdered food coloring. I used a tooth pick to etch details into it. I propped the tail up with a tooth pick until the chocolate hardened so it would stay up. I made two figures from modeling chocolate (the mouse and Prince Caspian) but found the chocolate melted so easily in my hands because they were so small that I had to keep sticking them in the freezer! So I made Edmond and Lucy out of fondant. The swords are simply tooth picks. I secured the figures to the ship with tooth picks. 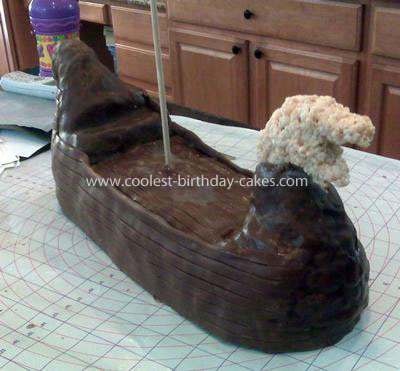 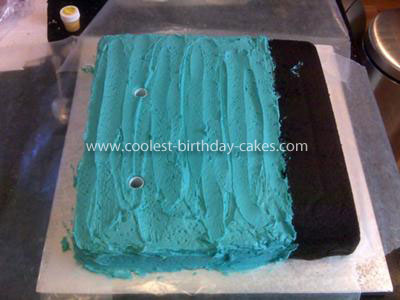 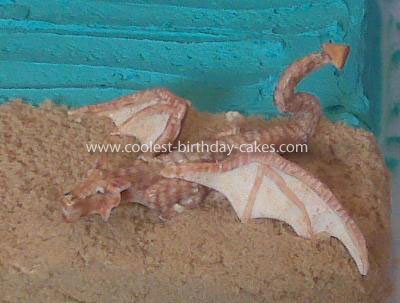