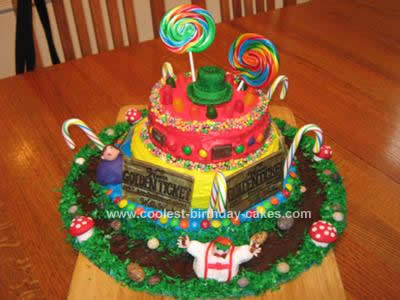 I made this Homemade Willy Wonka Cast Party Cake for the cast part of Willy Wonka Junior at my son’s school (he played Charlie!). I just made three round cakes of different sizes, stacked them up and decorated! I am no chef, so I made the cakes from mixes (two Devil’s Food and one white), and used store-bought frosting and fondant.

First I frosted a gold-foil cardboard tray (purchased at a cake decorating store) with chocolate frosting for the chocolate river, and used coconut colored green with food coloring for the grass. I made the red mushrooms and “Augustus Gloop” (stuck in the chocolate river) out of fondant. The rocks are chocolate candy rocks I bought at a great candy store.

Next came the first cake layer, which I frosted blue using icing dye (much better than food coloring for frosting). I put some coconut “grass” on the outer edge of that layer. I made the “Golden Tickets” out of rolled white fondant cut into cards, which I then painted using edible gold dust that I mixed with vanilla extract. When the gold paint dried, I traced the lettering from a Golden Ticket I had printed out off the Internet so that it made an impression in the fondant ticket.

I used a black food-coloring marker (also from the cake supply store) to color in the lettering. I just made a ball out of purple fondant and stuck a fondant head with fondant pigtails on it and drew the face in with food-coloring markers for “Violet” — that was exactly what she looked like in the show, so that made it easy! The hat on top of the cake is also fondant, with green glittery sprinkles “glued” on with water. Then I just went crazy with store-bought candies, including pieces of a real Wonka Bar (they all have the letter “W” on them), Wonka Nerds Ropes for around the top layer, and M&Ms turned upside down so that they became W&Ws!

It was a HUGE hit! 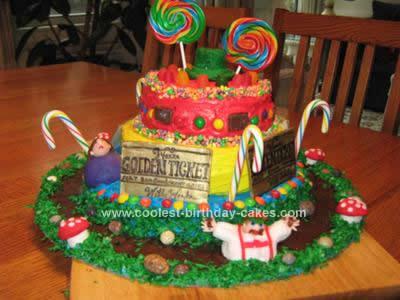