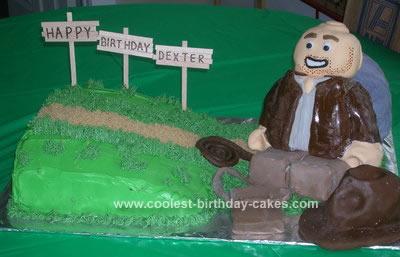 I made this Lego Indiana Jones Birthday Cake Design for my son for his fifth birthday. For the Indiana Jones figure, I used a Lego man silicone cake mold. I didn’t want him laying down, but I didn’t think I could make him stand up. So, I had him leaning against a boulder, which I made from Rice Krispies and covered with gray fondant. I cut off the legs and covered them with light brown fondant. His torso I covered with a very light brown (just on top) for his shirt and then covered the rest with dark brown fondant. I covered his arms with a separate piece of brown fondant. I made little pockets out of brown fondant and put them on his coat. I put his torso on top of his legs and leaned it against the boulder. His head I covered with tan fondant and secured it to his body with a dowel rod. I used small pieces of fondant for his mouth, eyes, and eyebrows. I used light brown coloring gel to paint little brown spots for his stubble.

I used one of my son’s Lego Indiana Jones figures to help me. It was small, but helpful. I made the top part of the hat from Rice Krispies and used a piece of cardboard for the brim. The bag is just fondant. I cut out a rectangular piece and put a small piece of fondant rolled thin on top. The whip is just fondant rolled into a gradually tapering rope. I used a toothpick to scratch a cross-hatch pattern into the handle.

For the rest of the cake, I used a rectangular cake and cut the end to make it looked tapered (like the boulder had rolled down the path and stopped). I covered it with buttercream frosting (since people usually like the taste of it better than fondant). I used light brown sugar to look like dirt. I used a cake decorating tip to make grass in different place. I decided to use craft sticks glued together to write happy birthday using a brown marker.

It took several hours to make. Decorating Indiana Jones was the most difficult part. I decided to make my own fondant (marshmallow fondant). I found the recipe online and it was fairly simple to make I thought the marshmallow fondant tasted better than fondant I had used in the past. It took quite a while to get the fondant to the dark brown color that I wanted. I wasn’t sure what color to use for the flesh color. I used ivory gel paste (just a little) and was pleased with the color. It took quite a while, but my son really liked it! 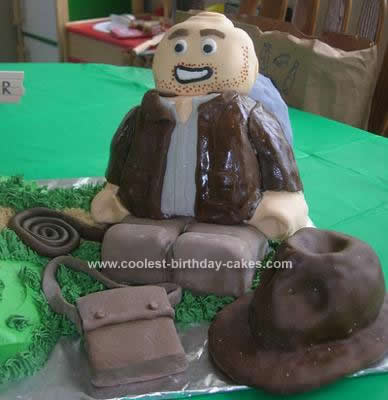